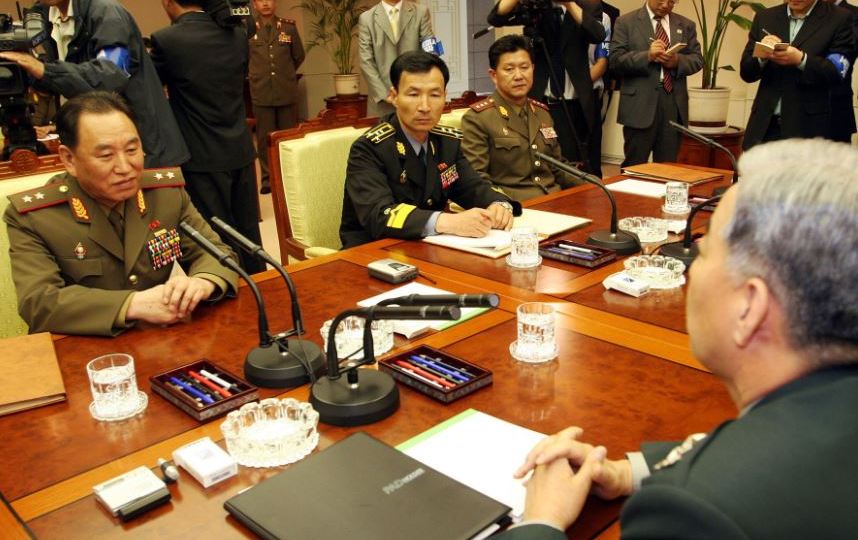 After a year of heightened tensions, the 2018 Winter Olympics looked like an opportunity to improve ties between the two Koreas and by extension, the United States.

A unified team marched at the opening ceremony, all eyes were on a 229-woman cheer squad from the North and a joint women’s ice hockey team took to the ice (though language barriers proved tough to overcome).

But it could all be undone at the closing ceremony on Sunday night (AEDT), with eyebrows being raised about Kim Yong Chol, the man North Korea has chosen to see off the Games.

Kim is a vice-chairman of the North’s ruling Workers’ Party Central Committee, and also the head of the North Korean ruling party’s United Front Department, the body responsible for inter-Korean affairs.

He’s also the alleged mastermind of two attacks that killed 50 South Koreans in 2010.

It was in this role it’s alleged he directed North Korea to stage a torpedo attack on the South Korean warship Cheonan, a claim the North denies.

Eight months later, the North bombarded South Korea’s front-line Yeonpyeong island, killing two marines and two civilians. It was the first North Korean attack on a civilian area in South Korea since the end of the 1950-53 Korean War.

Some are questioning the wisdom of letting Kim attend the closing ceremony.

One hypothesis: The North’s decision to send him is a carefully constructed and insulting attempt to gauge just how far South Korea’s liberal president Moon Jae-in is willing to go to accommodate the North in his quest to lower hostility between the rivals.

Representative Jun Hee-kyung, a spokeswoman for the opposition Liberty Korea Party, issued a statement calling Kim “the main culprit of the Cheonan’s sinking,” saying Kim should be “brought to his knees” in front of the victims’ families and dismissing his visit as an “extraordinary humiliation” for South Koreans.

US State Department spokeswoman Heather Nauert recently suggested Kim Yong Chol should visit a memorial in the South to those slain in 2010.

South Korea’s Unification Ministry acknowledged it was a difficult decision to make — one that it chose to allow in the end because it hopes to use the Olympic closing ceremony as an opportunity to advance discussions for improving ties.
And that’s before we talk about Ivanka

President Trump’s daughter and advisor Ivanka is will watch the closing ceremony from the same seat Vice-President Mike Pence watched the opening ceremony.

The mood between Mr Pence and Kim Yo Jong (Kim Jong-un’s sister) at the opening ceremony was icy.

Don’t expect the mood in VIP box to thaw when Kim shares the same television frame with Ivanka, adding another dimension to an already tense situation.

And when the Olympics are over, we could be headed back to square one

Back to best of enemies?

The Koreas held top-level summits in 2000 and 2007 during previous liberal South Korean governments that focused on engagement and cooperation with the North, and Mr Moon is likely keen to have a third meeting.

But a big test is ahead. Washington and Seoul postponed their usual, jointly run spring war drills because of the Olympics, but they are likely to resume.

The North claims these drills are an invasion rehearsal and has linked them to its own weapons tests and drills and an uptick in belligerent rhetoric.