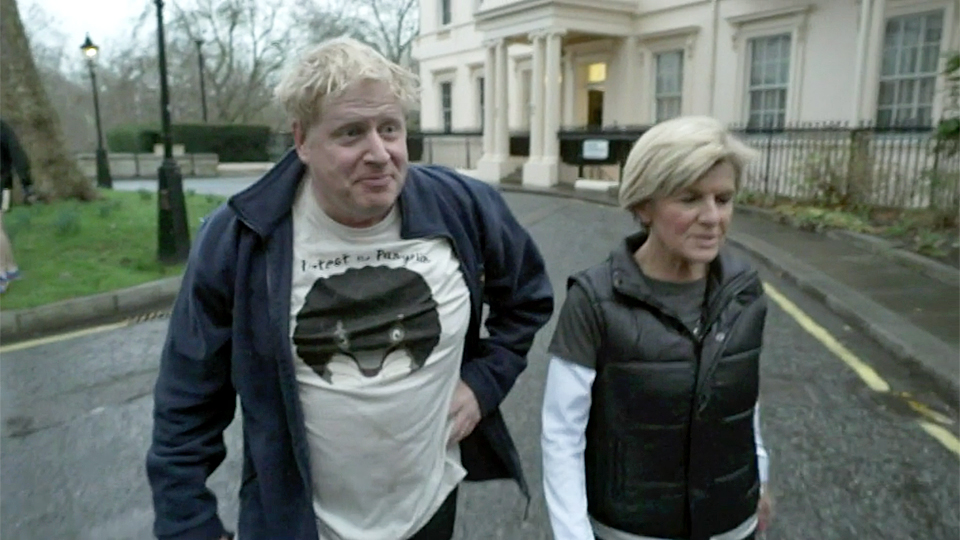 The pair both donned T-shirts promoting the conservation of endangered pangolins. Photo: ABC

Julie Bishop has joined her British counterpart Boris Johnson for trade diplomacy on the run – a photo opportunity that left the heavyset Brit looking worse for wear.

Ms Bishop encouraged a free trade agreement between Australia and the UK as a stepping stone for Britain to join the resuscitated Trans-Pacific Partnership, the full text of which was publicly released on Wednesday.

They both wore t-shirts from the Zoological Society of London promoting the protection of pangolins, which are often traded illegally – one of Mr Johnson’s pet projects.

Ms Bishop paired her pangolin t-shirt with trendy sportswear, whereas Mr Johnson opted for a daggier outfit of long shorts and a beanie.

It did not appear that jogging was one of Mr Johnson’s favourite past-times, however – or, at least, he seemed less accustomed to running at Ms Bishop’s pace.

A spokeswoman for Ms Bishop said talks included how Britain and Australia could negotiate a post-Brexit free trade agreement.

“Minister Bishop encouraged the UK to use such an FTA as a vehicle to later sign up to the [Trans-Pacific Partnership] 11,” the spokeswoman said.

The TPP trade deal, which had been on life support after the United States’ withdrawal, is expected to be signed by the remaining 11 countries – Australia, Brunei, Canada, Chile, Japan, Malaysia, Mexico, New Zealand, Peru, Singapore and Vietnam – at a meeting of trade ministers on March 8.

The Australian Council of Trade Unions (ACTU) came out swinging against the proposed deal, saying it would make it easier for corporations to import cheaper labour.

“This is a bad deal for working people and a win for corporate power. It lets companies exploit temporary workers without ever having to offer jobs to people in Australia,” ACTU secretary Sally McManus said.

Prime Minister Malcolm Turnbull may discuss the TPP with Mr Trump when the pair meet in Washington later this week, after the US President surprisingly flagged the possibility of rejoining the deal last month.