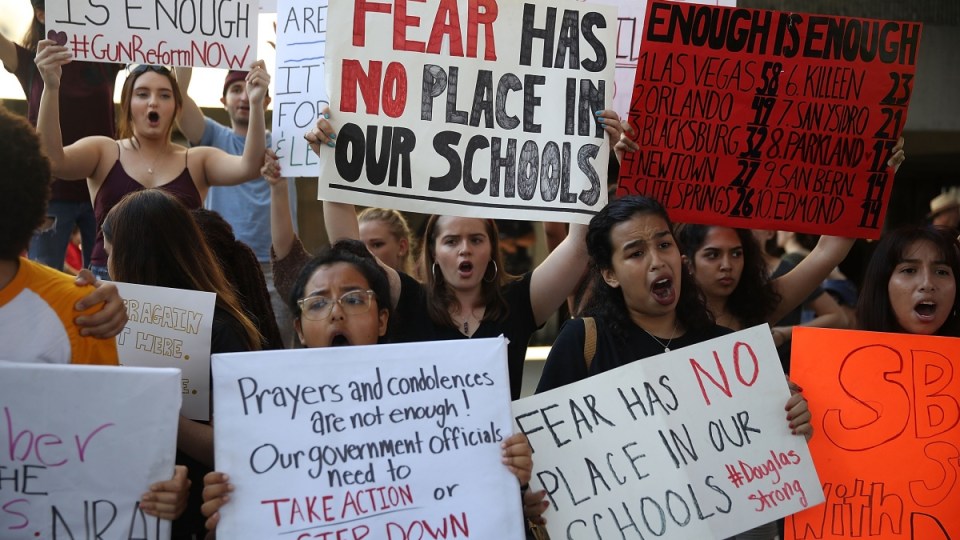 "We feel neglected and at this point, you're either with us or against us." Photo: Getty

The March for Our Lives will take place on March 24, with sister rallies across the country aimed at making the Marjory Stoneman Douglas high school shooting a turning point in the nation’s gun debate.

Student organisers said the march was a bid to “shame” politicians into reforming laws that make firearms too readily available in the United States.

Nikolas Cruz, 19, a former student at the high school in the Florida city of Miami, has been charged with 17 counts of premeditated murder after opening fire on students and teachers. The AR-15 rifle allegedly used in the massacre was purchased legally.

“People keep asking us, ‘What about the Stoneman Douglas shooting is going to be different? Because this has happened before and change hasn’t come’,” Student Cameron Kasky told US ABC News.

“This is it. People are saying that it’s not time to talk about gun control. And we can respect that.

Survivors of the school shooting in Florida are calling for a march on Washington to demand action on gun control. "People are saying that it’s not time to talk about gun control, and we can respect that. Here’s a time: March 24, in every single city." https://t.co/ObmdZo67La pic.twitter.com/qaJfAZy99k

“Here’s a time. March 24th in every single city. We are going to be marching together as students begging for our lives.

“We feel neglected and at this point, you’re either with us or against us.”

The march is just one of many student-led protests amassing support against gun violence on social media in the wake of Wednesday’s attack.

Students rallied together on Twitter over the weekend with talks of a nationwide walkout of schools until gun reform is implemented.

The National School Walkout post fhas been retweeted more than 100,000 times, calling for teens to sign a petition and pledge to sit outside their schools and peacefully protest.

“We are students, we are victims, we are change,” it read.

The planned day of protest also generated support from other movements across the US.

Women's March Youth EMPOWER is calling for students, teachers, and allies to take part in a #NationalSchoolWalkout for 17 minutes at 10am on March 14, 2018. Join us in saying #ENOUGH!https://t.co/8ZE8uthRlZ pic.twitter.com/45yCZl4zDm

What is amazing about these Parkland kids is that instead of being just victims, they’re funneling their rage to something very constructive that may change the history of this country. I’m immensely proud of them. #MarchForOurLives

The day of action follows Sunday’s fiery 12-minute speech from survivor Emma Gonzalez, 18, who called out US President Donald Trump, the National Rifle Association of America (NRA) and other politicians for sending “thoughts and prayers” without delivering gun reform.

“To every politician taking donations from the NRA, shame on you!” she said.

“If the President wants to come up to me and tell me to my face that it was a terrible tragedy and … how nothing is going to be done about it, I’m going to happily ask him how much money he received from the National Rifle Association.”

She vowed the Marjory Stoneman Douglas shooting would be “the last mass shooting”.

‘You’re either with us or against us’: Florida students to march to demand gun reform