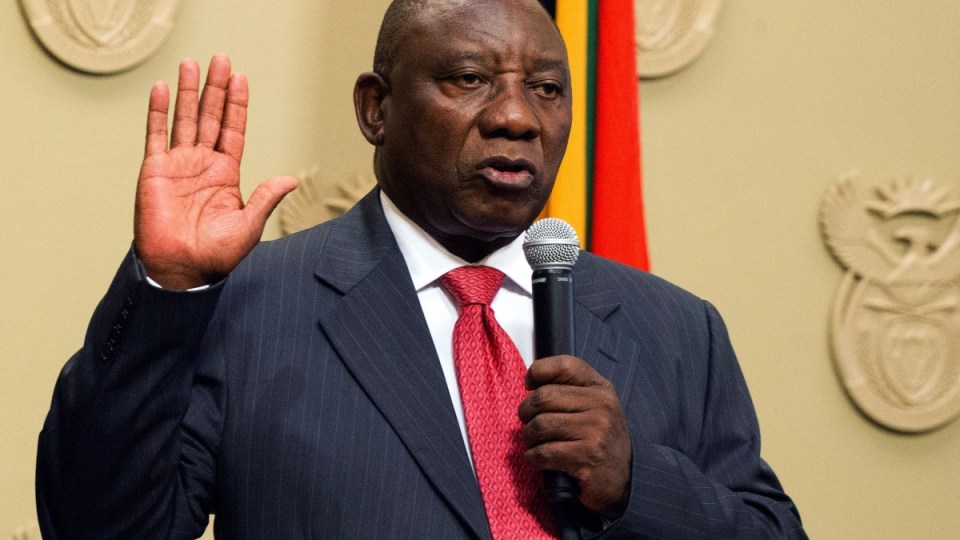 Cyril Ramaphosa, who has been elected as South Africa’s president in a parliamentary vote, is pledging to tackle endemic corruption after scandal-ridden Jacob Zuma resigned on orders from the ruling African National Congress.

Mr Ramaphosa, who was originally anointed by South Africa’s first black president Nelson Mandela as his chosen successor, faces an uphill battle in revitalising growth, creating jobs and stamping out a culture of graft in the nation.

Still, Mr Zuma’s departure late on Wednesday provided evidence of the strength of South Africa’s democratic institutions, from the courts to the media and the constitution.

Mr Ramaphosa, in brief remarks to parliament on Thursday local time ahead of his first state of the nation address expected on Friday, said he would work hard “not to disappoint the people of South Africa”.

“The issues that you have raised, issues that have to do with corruption, issues of how we can straighten out our state-owned enterprises and how we deal with state capture (influence-peddling) are issues that are on our radar screen,” he said.

Mr Ramaphosa was elected ANC head in December and will be president until elections next year.

Africa’s most developed economy needs faster economic growth if it is to reduce high unemployment and alleviate persistent, widespread poverty that aggravates inequality and stokes instability.

Mr Zuma bowed out hours after police raided the luxury home of the Gupta family, the Indian-born billionaire allies of the former president who have been at the centre of corruption accusations against Mr Zuma and his circle for years.

“Defiant in defeat” and “Going, Going, Gone” were among the newspaper headlines that capturedMr  Zuma’s unwillingness to leave.

Julius Malema, leader of the far-left Economic Freedom Fighters (EFF), led his party in a mass walkout from parliament on Thursday, saying it would not take part in the election of a new president so as not to legitimise an ANC candidate.

The EFF, which has six per cent of the seats in parliament, had sponsored a no-confidence motion in Mr Zuma that would have gone ahead on Thursday had Mr Zuma not jumped.

The foundation set up to guard the legacy of the late anti-apartheid icon  Mr Mandela said Mr Zuma’s departure brought to an end “a painful era for the country”.