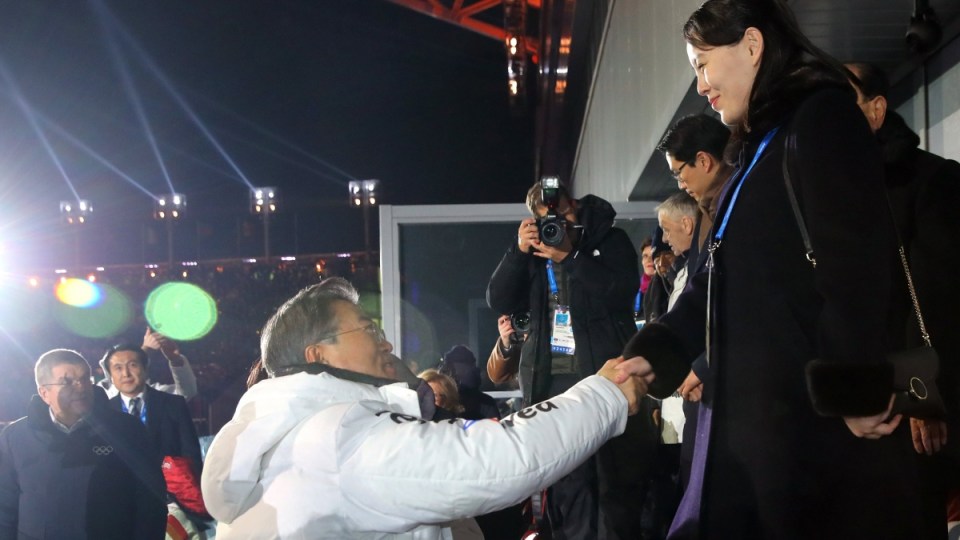 Kim Yo-jong, aged in her early 30s, is reportedly in charge of her brother's public image. Photo: AAP

The image capturing the simple, but public gesture of good will may be the defining photograph of the 2018 Winter Olympics, starting with pageantry and parading at the opening ceremony in Pyeongchang on Friday night.

Due to the raised seating, President Moon is looking up at the “First Sister” in what could appear as a power imbalance.

But the member of North Korean royalty’s soft smile, accepting the gesture beneath the pulsating lights of the 35,000-seat, pentagonal stadium in Dagwallyeong-myeon, is a moment of shared understanding.

Dr Petrov said the North Korean delegation to Pyeongchang meant the nation was serious about reconciliation.

“Kim Jong-un couldn’t travel himself, he would have loved to do that, but he would have an arrest warrant in South Korea,” Dr Petrov said.

So he sent his younger sister, the person he trusts, the person very close to him and she is very active in domestic politics as well.”

North and South Korea showed periodic demonstrations of unity during the ‘Sunshine Policy’ years between 1998 and 2008 in both the Sydney Olympic Games in Australia and the 2004 Games in Athens in Greece, with both countries marching under the one flag.

Dr Petrov said the timing of the handshake was important with the United States and South Korea’s annual joint military exercises, postponed due to the Winter Olympic Games. They are now set for February and March.

“The Winter Olympic Games gave an opportunity for North and South Korea to get together, shake hands and talk about peace in Korea, as opposed to fear, fire and fury, intimidation, bullying and an arms race that the US brings to the region.”

US Vice-President Mike Pence was seen sitting a few seats away in the same VIP booth as the sworn foes kept with the ceremony’s theme of peace and harmony.

Their attendance at the opening ceremony was somewhat unexpected, but followed Ms Kim delivering a speech on New Year’s Day offering “détente”, or an easing of strained relations between North and South Korea.

The speech led to the isolated nation sending 22 athletes and a total of 500 North Koreans to the Winter Olympics.

The 30-year-old younger sister of North Korea’s supreme leader made history on Friday as the first person from the Kim Dynasty to step on South Korean soil since the end of the Korean War in 1953.

Ms Kim arrived with a high-level delegation of 22 officials in her brother’s private plane, which landed at Incheon International Airport and proceeded aboard a bullet train reserved for their exclusive use to the Games site.

Ms Kim is a powerful figure in North Korea, both as a dignitary and vice-director of the Workers’ Party of Korea Propaganda and Agitation Department, according to the U.S. Department of Treasury.