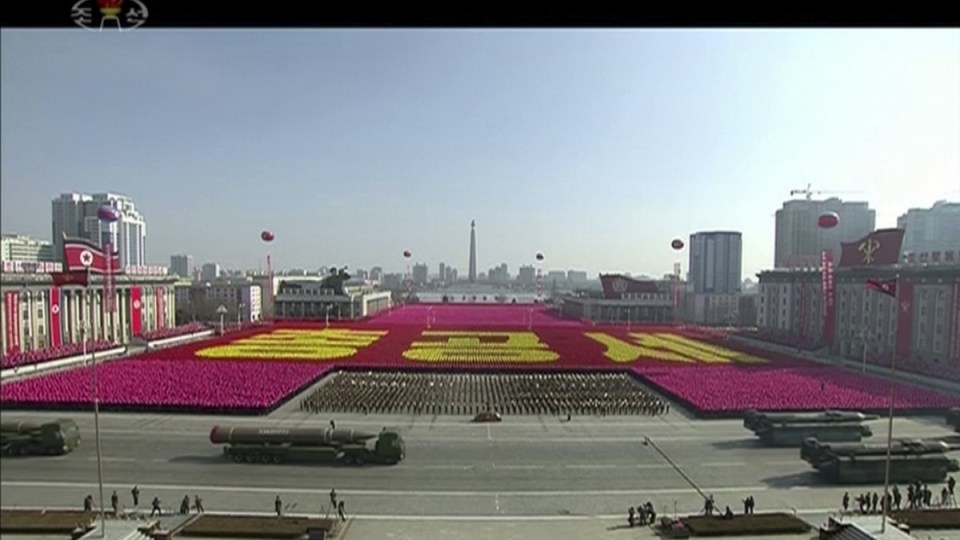 Kim Jong-un, dressed in a long black winter coat, was shown walking on a red carpet with his wife at the beginning of the event, which North Korea’s state-run television broadcast hours after it was over.

The parade, marking the 70th anniversary of the founding of its military, began with thousands of goose-stepping troops lined up in Kim Il-sung Square to form words and slogans.

Later, North Korea displayed its most powerful strategic weapons, including what appeared to be Hwasong-14 and Hwasong-15 ICBMs rolled out on launcher trucks.

Analysts believe the missiles, which were successfully tested last year in three launches, could potentially reach deep into the US mainland when perfected.

The parade also featured tanks, armoured vehicles, jets flying over the square in formation to make a “70”, and thousands of people dressed in red, white and yellow creating the letters “Kim Jong-un” in Korean and the ruling Workers’ Party’s symbol of the brush, hammer and sickle.

The North also rolled out what appeared to be a Hwasong-12 intermediate range missile, which it flew over Japan twice last year as it stepped up the aggressiveness of its weapons tests.

Nearly all foreign media was excluded from the event.

In a televised speech, Mr Kim said the parade marked North Korea’s emergence as a “global military power” despite facing the “worst sanctions”.

Warnings against even ‘0.001 millimetre’ infringement

He called for his military to maintain a high level of combat readiness to counter threats from the US and its “followers” so that “invasive forces cannot infringe upon or harass the republic’s sacred dignity and autonomy even by 0.001 millimetres”.

“As long as imperialism remains on the Earth and as long as the United States’ hostile policy on North Korea continues, the mission of our military, which is to protect our country and people and secure peace, can never change,” he said.

Mr Kim did not make any comments about the Olympics in the parts of his speech that were broadcast.

The coverage of the parade seemed heavily edited.

North Korea had said it would hold a big event to mark the 70th anniversary of the military.

February 8 has been seen as a less important founding anniversary but made something of a comeback in 2015 and was elevated further this year in part because it is the 70th — a nice round number.

The Olympics were likely to have also been a big factor in North Korea’s decision to hold the parade.

Mr Kim has gone out of his way to make sure the North will hold attention throughout the games.

Following a last-minute proposal during Mr Kim’s annual New Year’s address, North Korea is sending 22 athletes to compete in the Olympics and a delegation of more than 400 musicians, singers, martial artists and members of a cheering group to the games.