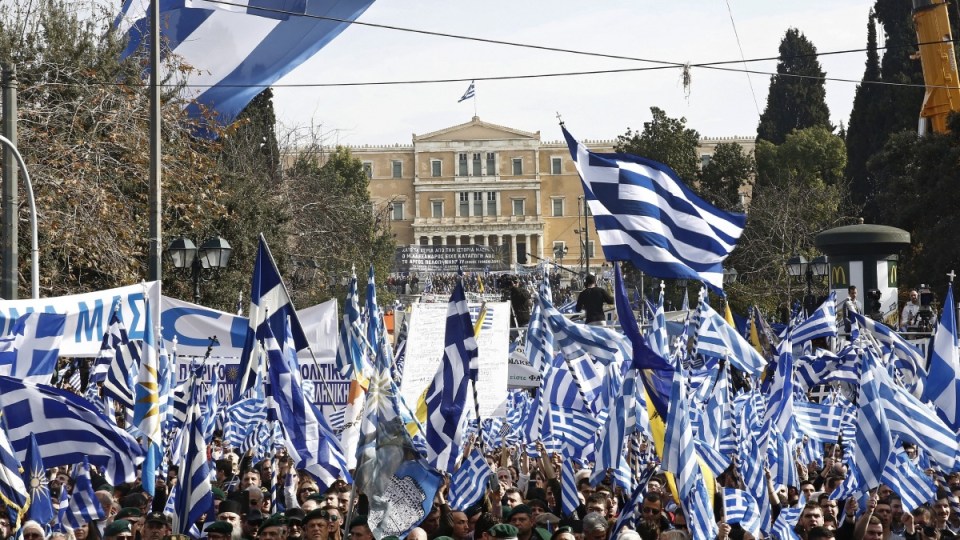 Greeks chanted "Hands off Macedonia!" and "Macedonia belongs to Greece!" in protest against the name of the former Yugoslavian state. Photo:

More than 100,000 protesters from across Greece have converged on Athens’ main square to protest a potential Greek compromise in a dispute with neighbouring Macedonia over the former Yugoslav republic’s official name.

Hundreds of chartered buses brought protesters in from around the country to the Greek capital on Sunday, while more people arrived on ferries from the islands.

Traffic was blocked throughout the city centre and three major subway stops were closed.

Chanting “Hands off Macedonia!” and “Macedonia belongs to Greece!” the protesters converged on Syntagma Square in front of parliament, many waving flags bearing the Star of Vergina, the emblem of the ancient Greek kingdom of Macedonia.

Police officials estimated the attendance at 140,000. Organisers, who claimed 1.5 million were at the rally, used a crane to raise a massive Greek flag over the square.

Tens of thousands of Greeks stage a mass rally in Athens, urging the government not to compromise in a festering name row with Macedonia. pic.twitter.com/2xNzWOZfRl

In Skopje, a spokesman for the Macedonian government said he didn’t know whether his government would react to the rally.

Macedonian opposition leader Hristijan Mickoski said in a TV interview that the rally hurt the prospects of a deal on the name issue.

Greek Prime Minister Alexis Tsipras was dismissive of the event.

“The overwhelming majority of the Greek people … irrespective of their opinions [on the issue] agree that major foreign policy issues cannot be solved through fanaticism and intolerance,” he said in a statement.

About 700 left-wing and anarchist protesters set up a counter-demonstration nearby, bearing banners calling for Balkan unity.

“Macedonia belongs to its bears” read one banner.

Dozens of riot police were deployed to keep the two demonstrations separate.

Suspected far-right supporters attempted to attack the counter-demonstration, but were prevented by police who used stun grenades and tear gas to hold them back.

The far-right side responded by throwing rocks at police.

The name dispute broke out after Macedonia gained independence from Yugoslavia in 1991.

The country is recognised by international institutions as the Former Yugoslav Republic of Macedonia, even though about 130 countries refer to it simply as Macedonia.

Many Greeks refer to it by the name of its capital, Skopje.

Greece argues use of the name implies territorial claims on its own province of Macedonia, home of one of the most famous ancient Greeks, Alexander the Great.

Officials in Skopje counter that their country has been known as Macedonia for a long time.