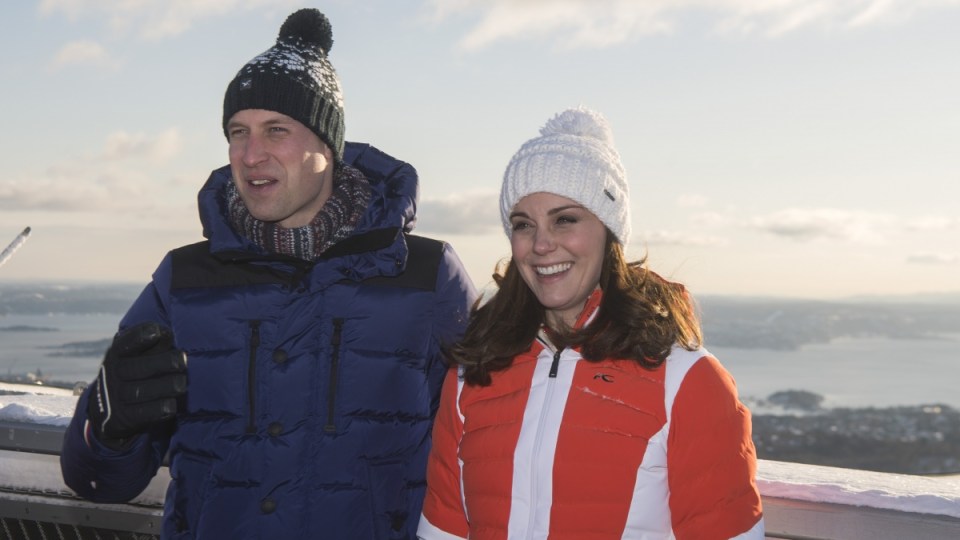 The Duke and Duchess toured Sweden and Norway without their children George, 4 and Charlotte, 2. Photo: AAP

The Duke and Duchess of Cambridge have joined Norwegian children in a winter wonderland as their Scandinavian tour comes to an end.

William and Kate, dressed for the freezing conditions in bobble hats and padded coats, watched as tiny schoolchildren showed off their skiing skills at Holmenkollen, the snowy hills over looking Oslo.

The four to six-year-olds displayed their skiing abilities, sliding through hoops, down slopes and making sharp turns in the snow as their teachers put them through their paces.

The Duke and Duchess also joined the youngsters as they cooked sausages over an open fire.

Earlier, at the nearby Holmenkollen ski jump, William and Kate met well-wishers as they walked into the museum of the famous sporting venue where brave jumpers hurtle down the slope.

One visitor asked the Duke if he was going to have a go at the event and he laughed as he replied: “No, no, leave it to the professionals.”

Inside the museum they were shown an exhibit about the Roald Amundsen Expedition to the South Pole and were reminded that the Norwegians beat their British rivals in the race to reach the pole first.

After the British and Norwegian royal couples laughed, Crown Princess Mette-Marit, who was with Crown Prince Haakon, told the Duke “I’m sorry,” and he replied “No, no, quite right.”

The small attraction is built into the hill, underneath the ski jump itself and opened in 1923.

It is thought to be the world’s oldest museum devoted to skiing and attempts to tell 4000 years of “exciting ski history” through exhibitions.

Among the items on show were fur-lined gloves and shoes, cooking pots, tin cans, cutlery, and a camera, as well as skis, poles, a sled, and a stuffed dog.

At the top of the ski jump William and Kate took in breathtaking views and watched sportsmen take on the challenge.

Standing on a balcony at the start house more than 60 metres above the ground, they watched Norwegian ski jumper Anniken Mork race down the track at 90kmh before taking a leap of faith towards the ground and landing gracefully near the bottom of the course.

Kate, meanwhile, was in a playful mood and made a snowball and then threw it at William. “It’s too cold for snowballs,” he said, smiling as the Norwegian royals stood with them.

The Duchess was certain that the couple’s children Prince George, four, and Princess Charlotte, two, would have delighted in the stunning surroundings.