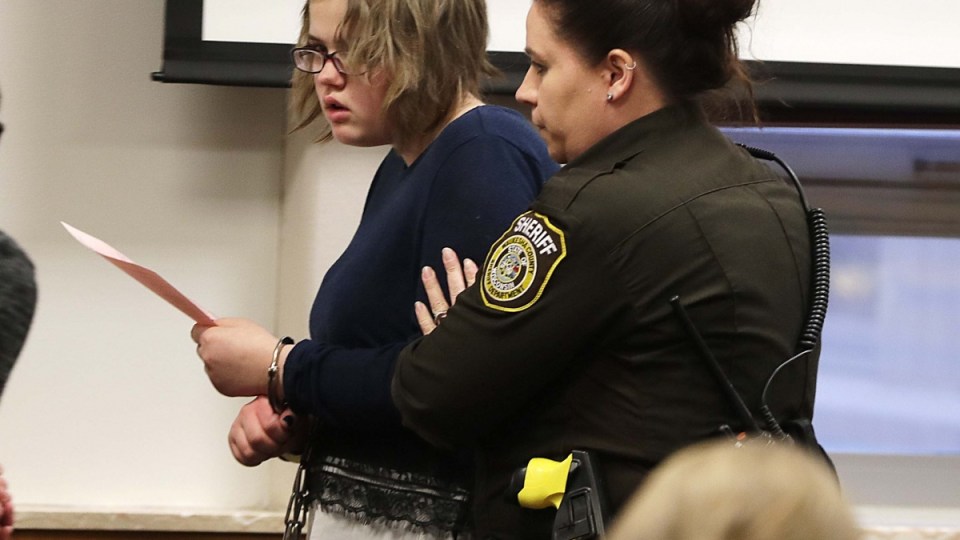 Morgan Geyser was just 12 when she and Anissa Weier plotted to kill their sixth-grade classmate. Photo: AAP

A teenage girl who stabbed a classmate to win favour with fictional horror character, Slender Man, has been sentenced to 40 years in a mental hospital, with the judge explaining his decision as “an issue of community protection”.

Morgan Geyser was just 12 years old when she lured her classmate Payton Leutner to the woods and stabbed her 19 times.

At the time, she believed the attack would appease a fictional horror character called Slender Man — a paranormal figure with spidery limbs and a blank face that kills children – who otherwise would harm them and their families.

On Friday morning (AEDT) Geyser, 15, broke down in tears before receiving her 40-year sentence.

“I just want to let Bella and her family know that I’m sorry,” she said, using Miss Leutner’s nickname.

“And I hope she’s doing well.”

Judge Michael Bohren granted the maximum penalty that prosecutors had sought and discounted Geyser’s youth – she was just 12 – at the time of the attack in 2014.

“What we can’t forget is this was an attempted murder,” Judge Bohren said.

Earlier, he heard from four doctors who talked about how Geyser is making progress with her mental illness, to various degrees.

But Bohren called the teenager “a fragile person” whose long history suffering from delusions made her a risk to harm herself and others.

Geyser, now 15, spoke briefly before she was sentenced, breaking down in tears as she apologised to Miss Leutner.

Geyser and another girl, Anissa Weier, admitted they had lured Miss Leutner into woods near a suburban park, in Milwaukee, Wisconsin.

Geyser stabbed Miss Leutner 19 times while Weier urged her on, according to investigators.

They left Miss Leutner for dead but she crawled out of the woods and got help from a passing bicyclist. All three girls were 12 at the time.

Weier was sentenced in December to 25 years in a mental hospital. She pleaded guilty in August to being a party to attempted second-degree intentional homicide, but she claimed she wasn’t responsible for her actions because she was mentally ill. The jury agreed.

“Really judge, it’s a miracle that Payton is still with us, that she survived this,” said prosecutor Ted Szczupakiewicz.

According to doctor, Brooke Lundbohm, Geyser was still hearing voices from someone named “Maggie” as recently as September.

Dr Lundbohm said while Geyser had made significant progress over the last three years, she emphatically believed she was still a danger to herself and others.

“This is not a close call,” she said.

Geyser’s attorneys argued that she suffered from schizophrenia and psychotic spectrum disorder, making her prone to delusions and paranoid beliefs.

They asked for her to be moved to a less restrictive facility with children her age and the possibility of being able to be on outings with supervision if she is well enough.

“I believe at the present time she is no more dangerous than any adolescent her age,” Dr Kenneth Robbins said.