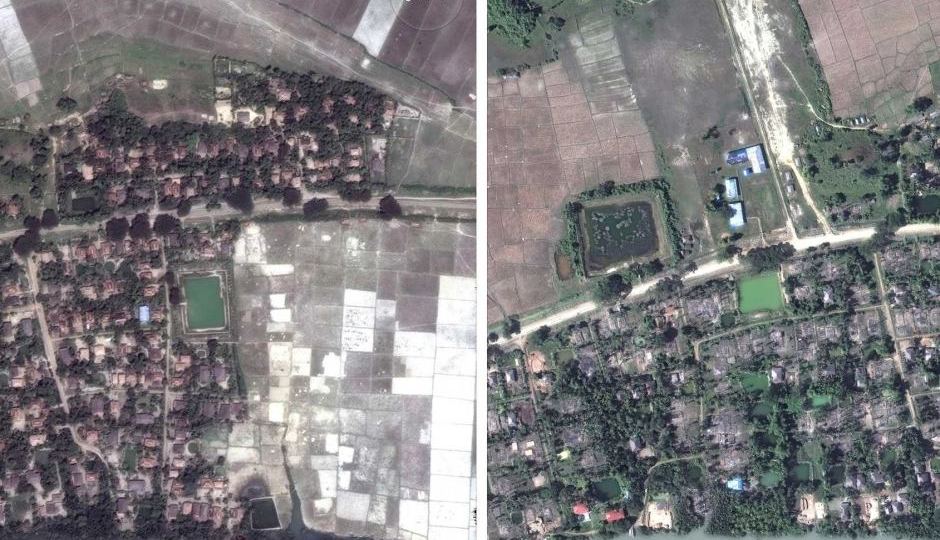 Satellite images show the village of Gu Dar Pyin, Myanmar before and after destruction. Photo: AAP

Five mass graves have been reported by Rohingya Muslim refugees who described surviving attacks on their villages by Myanmar’s military.

The testimonies by more than two dozen survivors now in Bangladesh refugee camps are backed up by time-stamped mobile phone videos, gathered during an Associated Press investigation.

It reports that the faces of men half-buried in the mass graves had been burned away by acid or blasted by bullets, with one refugee, Noor Kadir, saying he could only recognise his friends by the colour of their shorts.

Mr Kadir and 14 others had been choosing players for a football game when the gunfire began. By the time the soldiers stopped shooting at the Myanmar village of Gu Dar Pyin, only Mr Kadir and two teammates were still alive.

Days later, Mr Kadir found six of his friends lying among the bodies in two graves.

The Myanmar government regularly claims massacres like Gu Dar Pyin never happened, and has acknowledged only one mass grave containing 10 “terrorists” in the village of Inn Din.

The graves are new evidence for what looks increasingly like a genocide in Myanmar’s western Rakhine state against the Rohingya, a long-persecuted ethnic Muslim minority in the predominantly Buddhist country.

Htun Naing, a local security police officer in Buthidaung township, where the village is located, said he “hasn’t heard of such mass graves.”

Myanmar has cut off access to Gu Dar Pyin, so it’s unclear just how many people died.

Community leaders have compiled a list of 75 dead so far, and villagers estimate the toll could be as high as 400.

A handful of witnesses confirmed two other big graves near a hillside cemetery and smaller graves scattered around the village.

In the videos obtained by the AP, dated 13 days after the killing began, blue-green puddles of acid sludge surround corpses without heads and torsos that jut out from the earth.

Survivors said soldiers planned the August 27 attack and tried to hide what they had done, using shovels to dig pits and acid to burn away faces and hands so the bodies could not be recognised.

The survivors reported hiding in coconut tree groves and seeing soldiers burn down homes and shooting people before loading bodies onto trucks.

They also reported that Buddhist villagers then moved through Gu Dar Pyin, using knives to cut the throats of the injured and pitching the young and the elderly into fires.

“There were so many bodies in so many different places,” said Mohammad Lalmia, 20, a farmer whose family owned a pond that became the largest of the mass graves.

“They couldn’t hide all the death.”