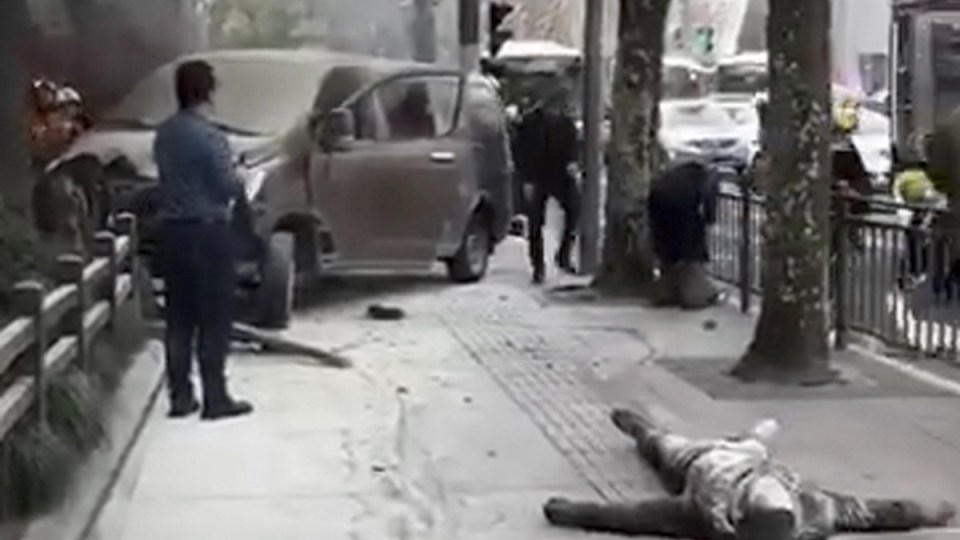 The van came to rest outside a Starbucks store. Photo: AAP

At least 18 people have been injured, three seriously, after a vehicle mounted the pavement in a busy part of central Shanghai and ploughed into pedestrians, the city government says.

The Shanghai Government said the vehicle hit the pedestrians on a road running next to People’s Square.

According to preliminary investigations, the fire was caused by a 40-year-old driver surnamed Chen who was smoking a cigarette inside the vehicle, the Shanghai public security bureau said on its official Weibo feed.

Shanghai-based news portal The Paper said the vehicle was a mini-van, and cited eyewitnesses as saying it was on fire as it drove onto the pavement, knocked people down and came to a stop in front of a Starbucks outlet.

A Shanghai-based Starbucks spokesman said the store was not damaged and its customers and employees were safe.

More of #Shanghai minivan crash: Witnesses said the vehicle caught fire before crashing into a fence in front of a coffee shop. The cause of the incident is being investigated https://t.co/4Sbkw07KxP (Courtesy: witness) pic.twitter.com/hbF1cHQijQ

“The store is currently closed and we will assist the authorities in their investigations,” he said.

The incident coincides with a visit to the city by British Prime Minister Theresa May.

Some bystanders tried to break the window of the vehicle and drag out the six people in the vehicle, including the driver, The Paper reported.

Other witnesses told the news outlet that there were gas cylinders in the vehicle.

The story was later removed from the news outlet’s website and replaced with the Shanghai Government’s short statement on the incident, likely an indication that the Government ordered the story to be taken down.

Footage on Chinese social media, which reporters could not independently verify, showed smoke coming from the vehicle and injured people lying in the street.

Other videos showed injured people lying on the pavement next to a Starbucks cafe.