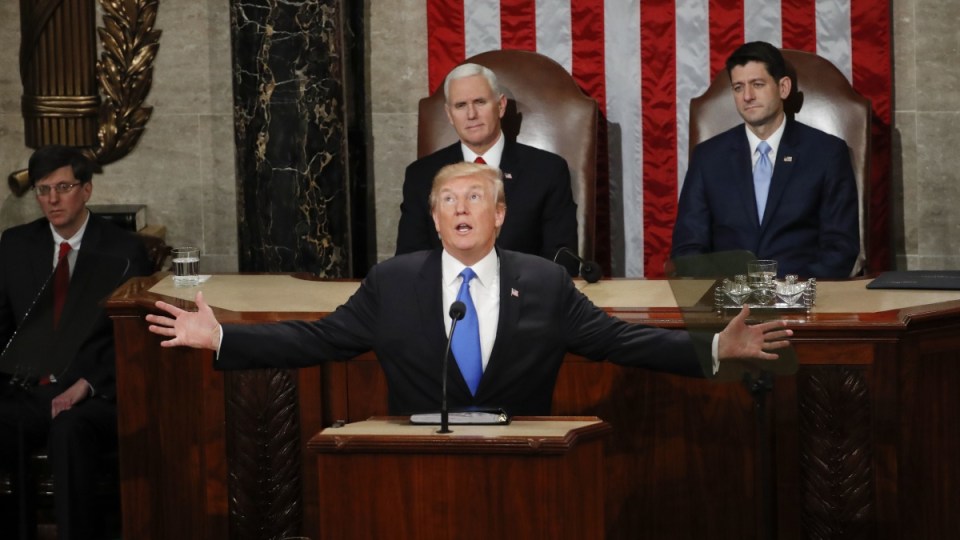 The President's 2018 state of the union address. Photo: AP

US President Donald Trump has been accused of lying after wrongly claiming his State of the Union address was watched by a record number of people.

He also said the Fox News coverage of the speech “beat every other Network, for the first time ever, with 11.7 million people tuning in. Delivered from the heart!”

While the viewing figure quoted by Mr Trump was correct, that number was far from the largest State of the Union audience.

Thank you for all of the nice compliments and reviews on the State of the Union speech. 45.6 million people watched, the highest number in history. @FoxNews beat every other Network, for the first time ever, with 11.7 million people tuning in. Delivered from the heart!

Nielsen said the figure was also down about two million on Mr Trump’s 2017 address to the joint sessions of Congress in the first year of a presidency, which was watched by nearly 47.8 million people.

George W. Bush’s 2003 State of the Union, which argued for the Iraq war, was watched by 62.1 million people.

Mr Clinton’s speech to a joint session in 1993 was the most viewed ever with 66.9 million viewers.

Mr Trump was, however, correct in stating that Fox News dominated its cable rivals, with CNN attracting 3.1 million viewers, MSNBC claiming 2.7 million, and the remainder of the viewers tuning into America’s free-to-air networks.

The Trump administration has previouly been accused of misleading veiwing figures.

Former White Press secretary Sean Spicer last year said Mr Trump had drawn “the largest audience ever to witness an inauguration, period, both in person and around the globe”, with photographs of the National Mall in Washington suggesting otherwise.

An analysis of Mr Trump’s first year in office by The Washington Post alleged the President made 2001 false or misleading claims in 355 days.