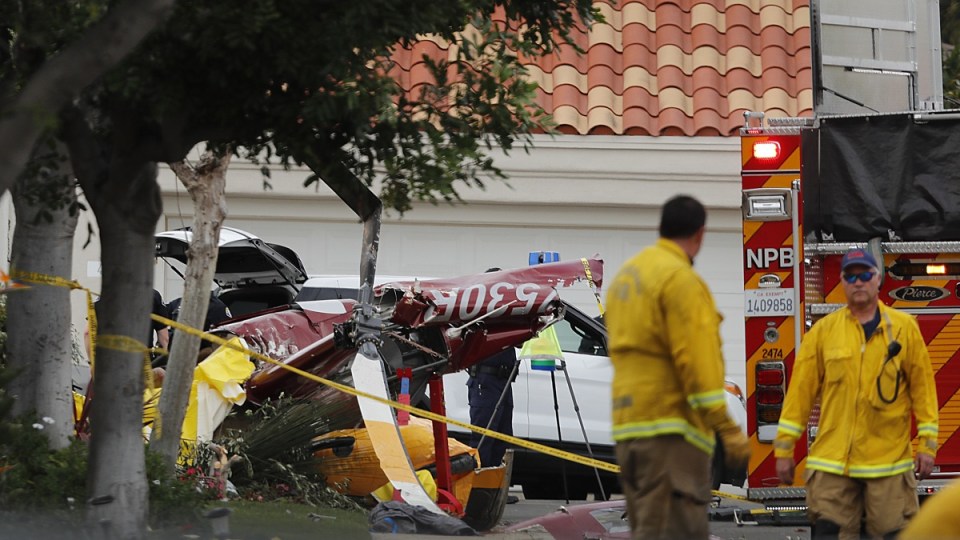 The site of the helicopter crash. Photo: Getty

Three people are dead and two injured after a helicopter crashed into a house in suburban California just a few minutes after take-off.

The impact happened with such force the aircraft was barely recognisable. The crushed metal sat in a heap on the side of the house, its tail rotor sticking out of the roof of a nearby home and a 1.8m chunk landing in the street in front of a third house.

“All of a sudden the house just shook and I thought, ‘Oh my gosh, we’re having an earthquake,”‘ said Marian Michaels, who lives behind the home in a gated community in Newport Beach.

Roger Johnson was doing some woodwork when he heard the chopping sound of a helicopter’s rotating blades and then a tremendous boom across the street.

“I turned to look out of the garage and that’s when I see this piece of metal flying through the air and hitting a bush and garage door,” he said.

“Then I heard someone scream – a real for-real horror scream, like something terrible had happened.”

Johnson rushed to the wreckage and cautioned people to stop trying to pull out or move victims.

Four people were aboard the Robinson R44 helicopter when it went down.

All were among those killed or injured and one person who was on the ground but outside the house was also injured, Newport Beach fire and police officials said.

They did not say who was which or give any specifics about the injuries.

The aircraft had taken off from John Wayne Airport, said Ian Gregor, a spokesman with the Federal Aviation Administration. The airport is about 1.6 kms from the crash site.