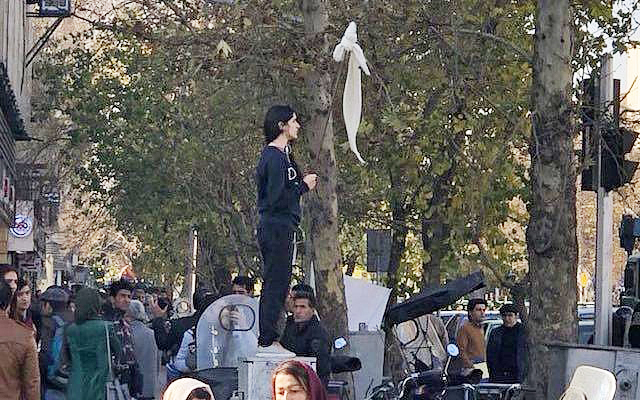 Vida Movahed's public protest against the hijab has sparked a wave of defiance among women in Iran. Photo: Twitter

In the past 24 hours, the photos have gone viral.

Young women standing tall and proud on the streets of Iran with their hair uncovered, defiantly waving their discarded headscarves on the end of sticks and in direct violation of the country’s strict laws that force women to cover their hair.

“They are risking their liberty, they are also exposing themselves to torture and other ill treatment at the hands of police and other paramilitary forces in Iran that enforce compulsory veiling against women,” Raha Bahraini, Amnesty international’s researcher on Iran, who has been closely following the spread of the powerful protest images, said.

“The campaign has gathered force and I believe the social media platform has given women the opportunity to speak out for themselves and show that they do not accept this degradation anymore.”

The phenomenon began gathering pace five weeks ago, on December 27 when a young woman was photographed standing on top of an electricity box on a busy Tehran street, her long hair tumbling over her shoulder as she looked straight ahead, waving a white headscarf.

Ms Bahraini says she received reports law enforcement officials arrested the woman on the spot and transferred her to a nearby detention centre.

“No information about her fate or whereabouts was made available publicly,” she said.

“And this sparked fears about her safety and wellbeing.”

After the image quickly spread, activists launched a campaign under the hashtag #whereisshe — demanding Iranian authorities reveal the fate of the young woman who was later identified as Vida Movahed, a 31-year-old mother of a 19-month-old baby.

Ms Bahraini said Ms Movahed was only just released on Sunday after a month in custody and that Amnesty is monitoring the case because she is still at risk of criminal prosecution.

“We call on Iranian authorities to drop any charges that have been brought against her,” she told the ABC.

“Under the Islamic penal code in Iran, any act that is deemed offensive to public decency is punished with a prison term of 10 days to two months, or 74 lashes.”

Compulsory hijab is an unnatural system enforced by the Islamic Republic. It has never worked. It will never work. And these women will win.#Iranprotests #دختران_خیابان_انقلاب pic.twitter.com/6SmNqyJ0VA

Nasrin Sotoudeh, a Tehran-based lawyer and human rights activist, was at the forefront of efforts to publicise Ms Movahed’s plight.

She said women in Iran want to have control over their own bodies.

“We are calling on the power of the people to help put the matter to rest,” she said.

Since Ms Movahed’s release, there has been an explosion of young women on social media following in her footsteps and the images are now spreading like crazy.

“I am in awe of their courage and their bravery,” Golnaz Esfandiari, an Iranian journalist living in exile and working as a senior correspondent for Radio Free Europe, said.

“Many people try to downplay it, saying, you know, it’s not an issue for Iranian women,” she said.

“But as a woman who grew up in Iran I can tell you it’s a big issue.

“Many Iranian women are fed up with this hijab rule and now we are seeing them take to the streets.”

The fate of all the copycat protesters is unclear, but Ms Sotoudeh reported at least one was arrested on the spot.

Ms Esfandiari said the protests tie in with wider, anti-regime demonstrations that took place across 80 Iranian cities in December, when more than 1,000 people were arrested and 25 killed.

“The fear factor is going away for some people inside the country and they are so frustrated they are not afraid anymore to take to the streets and publicly protest,” she told the ABC.