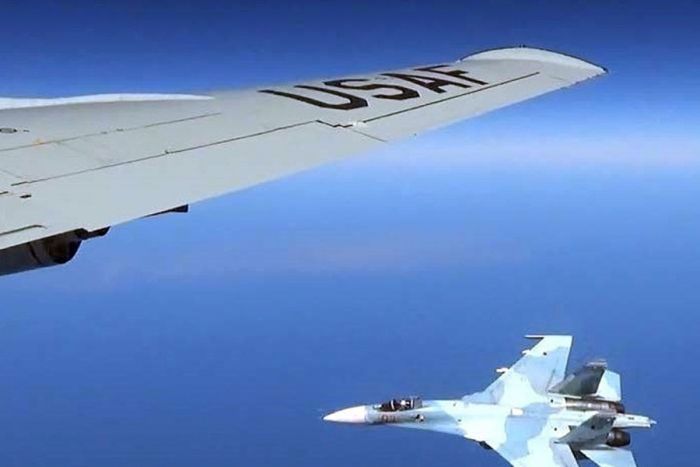 A Russian fighter alongside a US aircraft over the Baltic Sea. Photo: Supplied/US European Command

A Russian military jet engaged in an “unsafe interaction” with a US Navy surveillance plane over the Black Sea, coming within 1.5 metres, and crossing directly in front of, the American plane, the US State Department says.

“We call on Russia to cease these unsafe actions that increase the risk of miscalculation, danger to aircrew on both sides, and midair collisions,” the statement on Monday said.

“This is but the latest example of Russian military activities disregarding international norms and agreements,” State Department spokeswoman Heather Nauert said in the statement. “We call on Russia to cease these unsafe actions that increase the risk of miscalculation, danger to aircrew on both sides, and midair collisions.”

The encounter lasted two hours and 40 minutes, according to a Reuters report.

The Pentagon said the US aircraft was, “operating in accordance with international law” and did not provoke Russian activity.

The incident prompted the State Department to issue a statement late Monday (US time) accusing the Russians of “flagrantly violating existing agreements and international law”.

Earlier, the Russian newsagency quoted the defence ministry as saying a Russian SU-27 fighter jet had intercepted a US surveillance plane over the Black Sea.

“After the surveillance plane of the US Navy had changed its course to move away from the border … the SU-27 returned to its base,” RIA news agency quoted the ministry as saying.

It is not the first time the Russian military has blatantly challenged the US presence in the region, where it stepped up surveillance since Russia seized Crimea in 2014.

The US military has reported several “unsafe” interactions with Russian jets in the skies over the Black Sea in recent months.

In November, the US military said a Russian fighter jet flew within 15 metres of a US reconnaissance plane, causing the aircraft to tilt 15 degrees.

In May 2017, a Russian jet came within six metres of a US surveillance plane in the same region.

And in Syria in December, US F-22 planes intercepted Russian attack jets after they flew over the ‘de-confliction’ line intended to ensure safety.

The US jets fired warning flares during the intercept of the two Russian planes after they crossed the ‘de-confliction’ line several times.

“While it is difficult to determine the degree to which senior levels in the chain of command are involved in the specific conduct of any particular intercept, one thing is absolutely clear: The Kremlin desires to challenge US military patrols in and above the Black Sea and elsewhere,” Mr Kirby was reported as saying.

“It’s a policy we must presume the Russian defence establishment is acting concertedly and aggressively to pursue. Russian military leaders are known for a lot of things. Independent thinking is not one of them.”

Russian jet flies within 1.5 metres of US planes above Black Sea