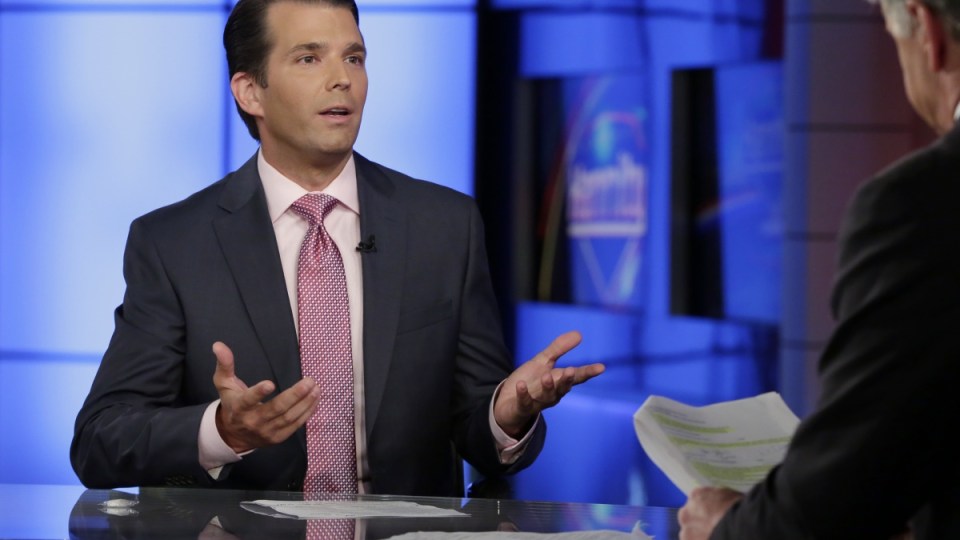 Hillary Clinton was among a host of celebrities who read from Fire and Fury for a Grammys skit. Photo: AAP

Donald Trump Jr has slammed Hillary Clinton for her surprise appearance at the Grammys, calling it a “great consolation prize for losing the presidency”.

Mrs Clinton was among a host of celebrities, including outspoken anti-Trump stars John Legend, Cher, Snoop Dogg, Cardi B and DJ Khaled, who read from Michael Wolff’s tell-all book about Donald Trump’s White House in a video segment played at the award show on Monday (AEDT).

It came as part of a skit by host James Corden where the “contestants” auditioned for the spoken word recording of Fire and Fury, resulting in wild applause from the crowd as Mrs Clinton was declared the winner.

However, the President’s son was not a fan of the segment, slamming his father’s former election rival.

Getting to read a #fakenews book excerpt at the Grammys seems like a great consolation prize for losing the presidency. #GrammyAwards

“The more Hillary goes on television the more the American people realise how awesome it is to have @realDonaldTrump in office,” he tweeted.

“Getting to read a #fakenews book excerpt at the Grammys seems like a great consolation prize for losing the presidency.”

United Nations Ambassador Nikki Halley also tweeted that the moment ruined the Grammys-watching experience for her.

A surprise appearance from Hillary Clinton reading Fire & Fury at the Grammys pic.twitter.com/VAYk70pqAj

“I have always loved the Grammys, but to have artists read the Fire and Fury book killed it,” she said.

“Don’t ruin great music with trash. Some of us love music without the politics thrown in it.”

Show producer Ken Ehrlich said backstage that Mr Corden and his producers did the work of convincing Mrs Clinton to appear. They sent her the script and in a few days, Mrs Clinton agreed to do it.

“She kind of took a couple of days to say ‘yes,’ but ultimately she saw the script, she knew what we were doing and she liked it,” Mr Ehrlich said.

Mr Ehrlich said he was aware the segment was getting some backlash, but  told reporters: “We stand by what we did.”