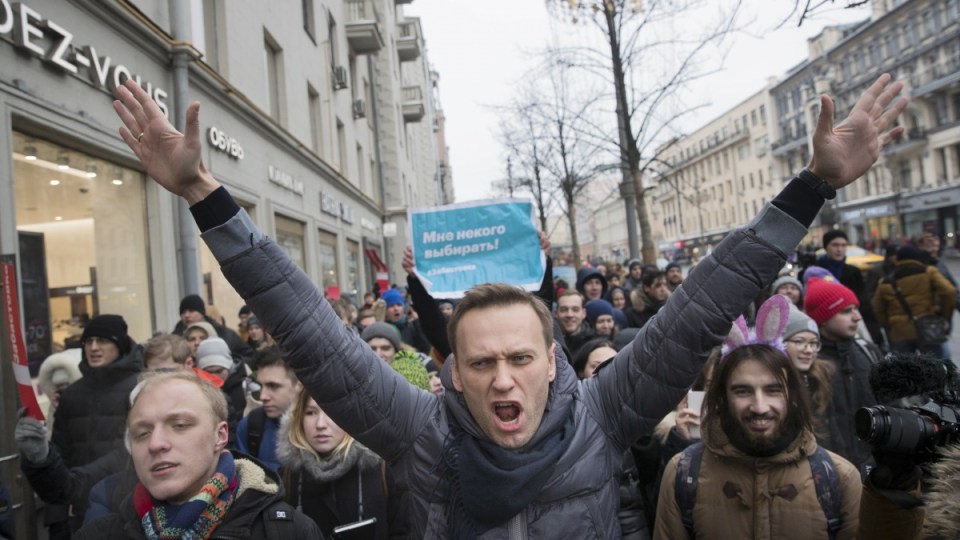 Alexei Navalny was wrestled to the ground by police and dragged feet first into a patrol wagon. Photo: AP

Russian opposition leader Alexei Navalny was dragged from the street by police soon after joining a rally in Moscow against the upcoming national election.

Hundreds of the anti-corruption activist’s supporters joined a nationwide day of protest against the authorities on Sunday local time, calling on voters to boycott what they said would be a rigged presidential election on March 18.

Video footage posted on social media showed Mr Navalny appear on Moscow’s main thoroughfare, a few hundred metres from the Kremlin, to join several hundred supporters taking part in the protest, which the authorities had said was illegal.

He had only walked a short distance when he was surrounded by helmet-clad police officers. They wrestled him to the ground on the pavement, and then dragged him feet first into the patrol wagon, the video footage showed.

“That does not matter. Come to Tverskaya. You’re not coming out for me, but for your future,” the post said.

Mr Navalny has been barred from running in the March 18 election, which polls show incumbent president Vladimir Putin is on track to easily win.

Although Mr Navalny says he knows Mr Putin will be re-elected, his boycott campaign is aimed at lowering voter turnout to try to take the shine off a Putin win.

The Kremlin says the election will be fair. The government said Mr Navalny and his supporters have minimal support and are irresponsibly trying to foment social anger which could lead to turmoil.

Crowds of young people gathered in the main square of the port of Vladivostok in the Russian Far East as speakers called the election, which polls showed incumbent Vladimir Putin should easily win, a farce.

“I will go to the elections when there’s a choice,” read one placard in Vladivostok, a reference to the fact that Mr Navalny has been barred from running over what he says is a trumped-up suspended prison sentence.

“Putin is gobbling up Russia’s future,” read another.

Mr Navalny’s supporters said they expected thousands of people to take part in demonstrations in 118 towns and cities across Russia on Sunday.