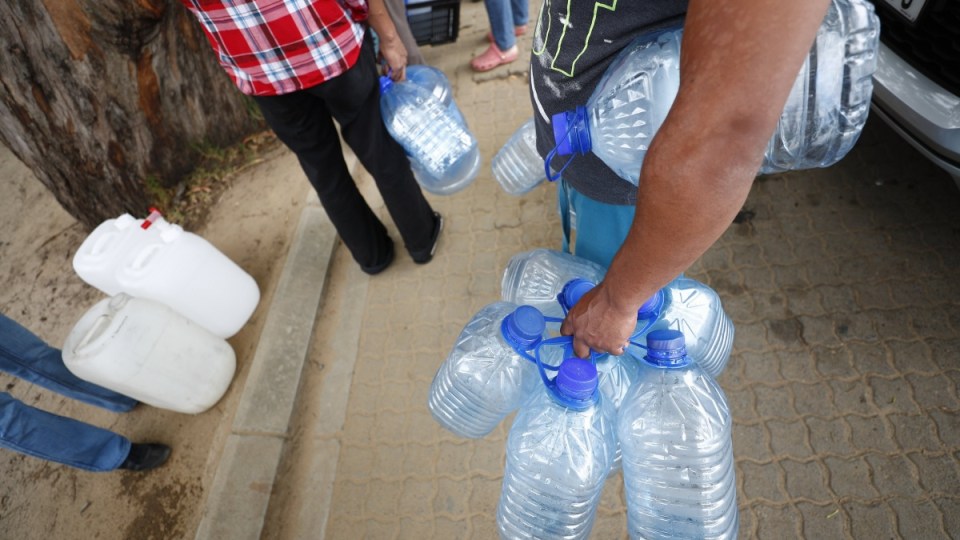 Cape Town will become the world's first major city in recent history to run out of water. Photo: EPA/Nic Bothma

A man empties a supermarket’s shelves of the last remaining large water cooler bottles, filling up his trolley and cradling another few in his arms.

A young woman approaches him, asking if he could spare a single bottle for her – he bluntly refuses.

Such is the desperation of the locals in South African coastal city Cape Town where people are bracing for April 12 – a looming deadline being dubbed as ‘Day Zero’ when the city is predicted to run out of water.

Severe water restrictions have limited residents to just 50 litres of water per day. As a point of comparison, the average Sydneysider uses about 295 litres of water each day while Melburnians use 160 litres.

and so it begins. Guy took every single bottle of water left in this PnP (Note empty shelf behind him) A young woman came up to him & asked if she could have one. He straight up said "No They are all mine". Next few moths are going to get pretty interesting. #WaterCrisis #DayZero pic.twitter.com/sMWHLKwCXl

Images have emerged of the devastating scenes of locals queuing up in long lines for drinking water from collection points, juggling several water bottles.

“This is like a post-apocalyptic reminder,” he told The New Daily.

“We assume we can just turn the tap on, or flush the toilet, or have a 20-minute shower.

“I think this could honestly be life-threatening for some people in the community. People will take risks with their hygiene and look to alternative water sources which might contain bacteria.”

Capetonians have been forced by the imminent threat of water running out to change their ways, turning to any means necessary to save water.

This is especially true since ‘Day Zero’, originally scheduled for April 21, was brought forward over the weekend to April 12 – a confronting reaffirmation of the severity of the plight and the need to reduce water consumption.

Some of the methods being adopted by the city of 3.7 million include using grey water from the laundry, washing and bathing to fill toilet cisterns for flushing purposes, using dry shampoo, bathing using a bucket and soap, and minimising the amount of cutlery and crockery in need of washing.

This is me standing in my skottel to wash. It's amazing how little water one actually needs for a good scrub. The water is cold bcos waiting for warm wastes too much. pic.twitter.com/AJXG1Oh0CY

Water from Monday hair wash ready to go into the toilet cistern. No-one in Cape Town should be using fresh water to flush. Turn off the cistern tap. Fill it with grey water and flush as little as possible. pic.twitter.com/Sc90LLqnKs

When Cape Town reaches Day Zero, its dam levels will lower to 13.5 per cent and most of the city’s taps will be turned off.

Dr Seona Candy, a researcher in Sustainable Food Systems at the University of Melbourne, spent some time in Cape Town in December and drove past the Theewaterskloof Dam.

It was mostly dust.

Australian towns could face their own ‘Day Zero’

Some water experts have warned that Perth would be facing a “similar or even worse” water shortage if not for the construction of its two desalination plants.

With Australia’s growing urban population and the effects of climate change, the east coast is also not considered immune, with Melbourne Water predicting last year that demand could outstrip supply for water in Melbourne by 2028.

“Perth would be in a very similar situation to Cape Town if it hadn’t made the decision to build its first desalination plant,” Jurg Keller, chief research officer at the CRC for Water Sensitive Cities, said.

“Now it is completely dependent on it, with almost half of its water supply coming from the desalination plant.

My mom and I just had a row about her helping herself to our grey, shower water. To think these arguments are usually about money or family relations. Now it’s about water. 😳 #DayZero

“While Brisbane, Melbourne, Sydney and Adelaide might not be using their desalination plants at the moment, who knows when the next drought will be.

“It’s like having insurance for your house. When you need it you have it and without it, you can’t survive.”

University of Sydney’s Stuart Khan, of the Water Research Centre, said it was not too far-fetched to predict that Australian towns or cities could one day face their own ‘Day Zero’.

“Seawater desalination is not a realistic option for inland cities, such as Canberra, Goulburn, Ballarat, Bendigo, Orange, Broken Hill,” he said.

“Those cities live with an ongoing threat of running out of water and such threats will be exasperated as populations increase.

“The next big drought could creep up surprisingly quickly. For example, in just three years from about 2002, many Australian cities went from having comfortable water supply storage to being on the brink of severe shortages.”

Cape Town is looking to Australian researchers at the Cooperative Research Centre (CRC) for Water Sensitive Cities and Western Australia’s Water Corporation for water solutions used by Perth and other major Australian cities to help solve its water crisis.