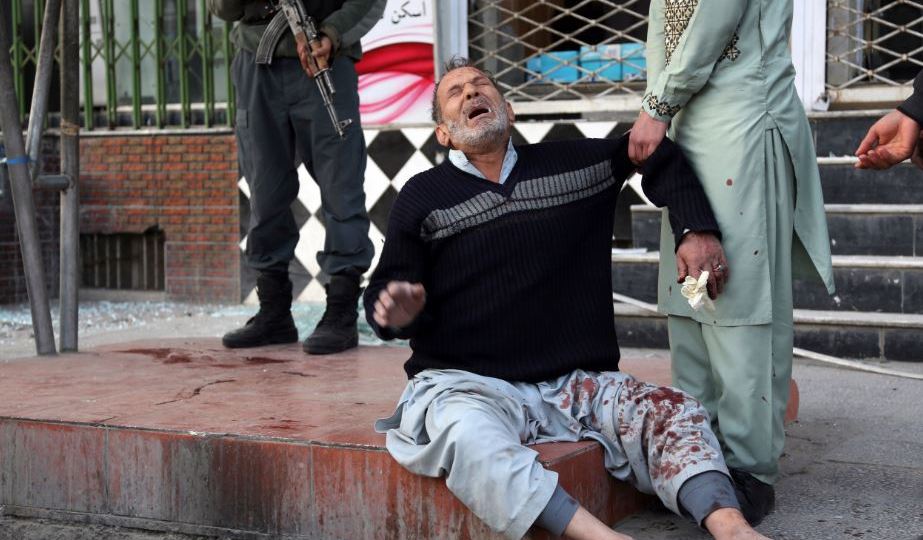 Splattered with blood, a survivor of the attack collapses with shock and grief in central Kabul. AP/Rahmat Gul

Foreign Minister Julie Bishop says she’s not aware any Australians were caught up in a suicide bombing in Afghanistan that has killed at least 103 people and injured 235 others.

Ms Bishop described Saturday’s attack, in which an explosives packed ambulance exploded at a checkpoint in Kabul, as “cowardly” and says the Australian government has strongly condemned the action, for which the Taliban has claimed responsibility.

“The Australian Embassy in Kabul is not aware, at this stage, of any Australians having been affected,” Ms Bishop said in a statement on Sunday.

“It highlights the continued threat posed by terrorist and insurgent groups to the people of Afghanistan.

“We will continue to work with the government of Afghanistan and other members of the international community to assist their efforts to build a safer and more prosperous future for the Afghan people.”

Saturday’s incident came a week after the Taliban claimed an attack on the Intercontinental Hotel in Kabul in which more than 20 people were killed.

Mirwais Yasini, a member of parliament who was nearby when the explosion occurred, said the explosives-laden vehicle approached a checkpoint close to an office of the High Peace Council and several foreign embassies.

Then, without warning, the ambulance exploded,

An interior ministry spokesman blamed the Haqqani network, a militant group affiliated with the Taliban which Afghan and Western officials consider to be behind many of the biggest attacks on urban targets in Afghanistan.

As medical teams struggled to handle the casualties, some of the wounded were laid out in the open, with intravenous drips set up next to them in hospital gardens.

“It’s a massacre,” said Dejan Panic, co-ordinator in Afghanistan for the Italian aid group Emergency, which runs a nearby trauma hospital.

In a message on Twitter, the group said more than 50 wounded had been brought in to that hospital alone.

Mr Yasini said bystanders helped the walking wounded to leave the scene while  ambulances with sirens wailing inched their way through the traffic-clogged streets of the city centre.

A plume of grey smoke rose from the blast area in the city centre and buildings hundreds of metres away were shaken by the force of the explosion.

Federal Labor joined the Australian government in offering support to build a country where people can live their lives free from the constant threat of violence.

In a joint statement, Opposition Leader Bill Shorten and his foreign affairs spokeswoman Penny Wong described the attack as “despicable and cowardly”.

“Labor again pays tribute to the bravery and dedication of Australian diplomats working in Afghanistan, and their swift work in assuring friends and family back home that no Australians appear to have been caught up in these tragic events,” they said.

Kabul blast death toll over 100 after ambulance explodes at checkpoint