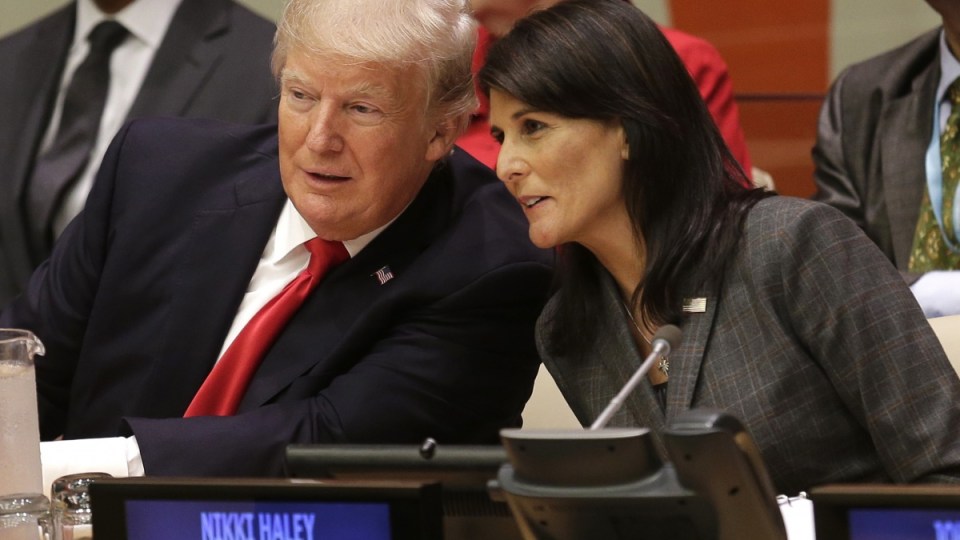 One of the leading female figures in Donald Trump’s cabinet has blasted rumours she is having an affair with the President, describing the claims as “disgusting” and “highly offensive”.

“It is absolutely not true, it’s highly offensive and it’s disgusting,” she said.

Mr Wolff stoked the claims by telling US talk show host Bill Maher that Mr Trump was having an affair, teasing that Fire And Fury contained clues to identity the woman in question.

Mr Trump is noted in the book as spending “a notable amount of private time with Haley” on Air Force One.

But Ms Haley, a prominent Republican politician and South Carolina’s first female governor, said she had “literally been on Air Force One once”, noting “there were several people in the room when I was there”.

Ms Haley, who was appointed to the top diplomatic post by Mr Trump last year, said the rumours were an example of the treatment faced by successful women in the spotlight.

“The thing is, when women work, they prioritise, they focus, and they believe if you’re going to do something, do it right. And others see that as either too ambitious or stepping out of line,” she said.

Those experiences were not confined to her time as a member of the Trump cabinet, she said.

“At every point in my life, I’ve noticed that if you speak your mind and you’re strong about it and you say what you believe, there is a small percentage of people that resent that,” Ms Haley said.

“And the way they deal with it is to try and throw arrows – lies or not – to diminish you.

“I saw this as a legislator, I saw this when I was governor, I see it now, I see them do it to other women,” she added.

Mr Wolff, who says he was granted complete access to the West Wing, has argued his book is based on conversations with senior Trump administration staff.

Ms Haley’s comments come as the White House deals with allegations Mr Trump once had an affair with the adult film actress Stormy Daniels, whose real name is Stephanie Clifford.

While Mr Trump and Ms Clifford have both denied the claims, she is reported to have previously confirmed the affair to the celebrity magazine In Touch in 2011.

Ms Clifford will appear on ABC’s Jimmy Kimmel Live! on Tuesday. Mr Trump will give his State of the Union address on the same night.