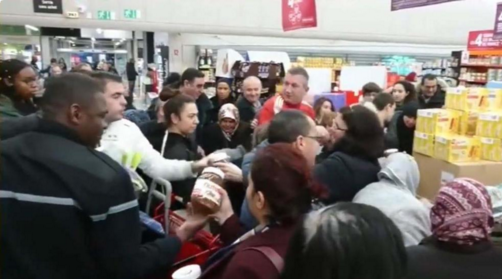 In 45 minutes, 700 pots of Nutella sold out in one supermarket during the three-day promotion. Photo: Twitter

Brawls have broken out in French supermarkets as shoppers scrambled to get their hands on discounted pots of Nutella.

Hysterical scenes were filmed in several supermarkets across the country operated by the Intermarche chain, which offered massive discounts on pots of the chocolate and hazelnut spread.

In one video posted on Twitter, customers are seen shoving each other and shouting as they try to get as many pots as possible. The video, using its first hashtag ‘Emeute’ — the French word for mutiny or rebellion — has already been seen more than 1.3 million times.

“Seriously? All this for Nutella,” wrote Kenny Le Bon.

According to Le Progres, a Loire regional daily newspaper, crates of 950-gram pots of the spread were selling out in 15 minutes in one supermarket.

“It was fighting. We sold what we sell in three months. On the crate carpets, there was only Nutella,” says an employee who had not experienced such a frenzied shopping spree in his 16 years of service.

Other supermarkets described scenes of shoppers pushing each other, jumping over employees wheeling crates with one customer receiving a black eye and another left in tears empty-handed, reported the newspaper.

Le progres described “riot” scenes in Rive-de-Gier, as mobile phones were out to film the chaos.

“They are like animals. A woman had her hair pulled, an elderly lady took a box on her head, another had a blood hand. It was horrible,” said one shopper.

According to Le Parisien newspaper, shoppers started to fight in the northern town of Ostricourt, prompting police to step in.

Intermarche did not immediately answer a message from the Associated Press seeking comments.

Ferrero, the company that produces Nutella, said “the decision for the special offer was taken unilaterally by Intermarche.”