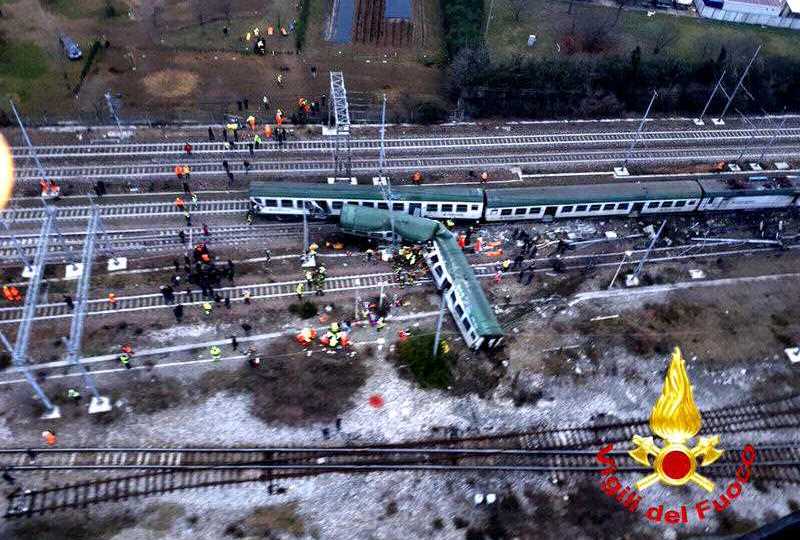 The incident is the latest in a series of serious incidents involving Italy's trains. Photo: AAP

It did not give further details.

“There currently are three dead, five severely injured and eight injured in ‘code yellow’, all of which in hospital,” the body representing the Interior Ministry in Milan said.

The train was heading from Cremona, in eastern Lombardy, into Milan’s Garibaldi station and came off the rails at a switch track.

An official with Rete Ferroviaria Italiana (RFI), the company that manages the tracks, said that experts had determined there had been a “structural failure” of the tracks about a mile from where the train had derailed but that it was “premature to say whether that was the cause”.

The head of Milan police said an investigation has been opened, with railway police interrogating the train driver and first evidence pointing at either a collapse of the tracks or a problem with a track switch.

A spokesperson for Trenord said the train was travelling at normal speed as it was approaching the station.

The latest in a number of rail incidents

Trenord is the regional train company serving the Lombardy region. It is notorious among passengers for dirty, packed cars and frequent delays.

On social media on Thursday, Trenord was ridiculed for tweets blaming delays into Milan on a “technical inconvenience” involving a train.

It was the latest in a number of incidents involving Italy’s ageing rail system.

In 2016, 23 people were killed when two trains collided on a single track in an olive grove in Puglia, south eastern Italy.

In 2009, 32 people were killed when a freight train carrying liquified petroleum gas derailed and exploded in Viareggio, in central Italy’s Tuscany region.