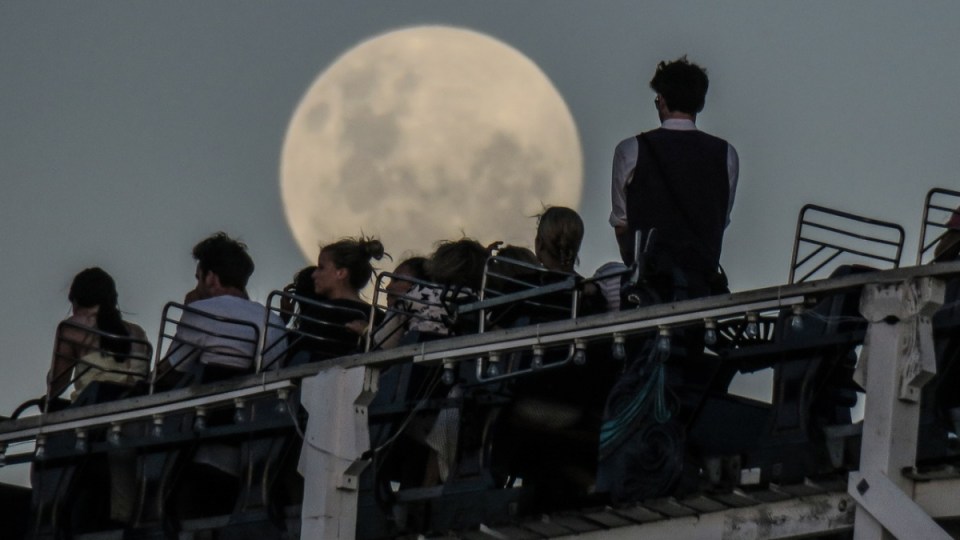 The full 'wolf moon' that lit up the sky in January this year. Photo: Leigh Henningham

In the evening hours, after sunset, on January 31, comes the biggest moon event since we landed on it – and the strangest lunar news ever. Members of the psychic community have warned the event is so strange that it may drive small children insane.

For the first time in 150 years, the moon – on one single night! – will be a blue moon, a red (blood) moon, and a supermoon. The climax of this show will be the blue moon turning red as it undergoes a full lunar eclipse.

A blue moon – which isn’t blue at all, unless the atmosphere is choking with garbage – is the second full moon to fall within the same calendar month. We’ll actually have another blue moon in March; February won’t have one at all.

A supermoon is when the moon comes closest to the earth in its orbit. The moon doesn’t travel in a circle around the earth, but rather travels in an egg shape. Two or three times a year there is a closer meeting between the two bodies. Although, we have a run on at the moment – there was one in December, one on January 31, and another coming in March.

“A supermoon tends to be seven to 13 per cent larger than average,” says Glen Nagle, the Education and Public Outreach Manager of the Canberra Deep Space Communication Complex.

The star of the big night is the total lunar eclipse. Most beautifully, as the eclipse begins, we will see the Earth’s shadow, the curve of the planet edging itself onto the surface of the moon.

“Proving the Earth is in fact round,’’ says Mr Nagle, noting the attention-seeking behaviour of flat-earthers in recent months.

During the eclipse, the moon loses contact with all direct light coming from the sun but it won’t go completely dark. Rather, it’s lit by light filtered through the Earth’s atmosphere, via the same spectral filtering – a mechanism known as Rayleigh scattering – that causes red sunsets and sunrises.

Likewise, the moon will take on a reddish hue – hence, the blood name – although depending on the make-up of the atmosphere, it could be ochre brown or an orange colour. The show will last 77 minutes. People in the US will have to get up before dawn to see it – while the Middle East and Asia will share the more convenient evening show as Australia and New Zealand.

But the total lunar eclipse itself – although a wonderful thing to see – isn’t the big deal. Australians will see another lunar eclipse in July this year, when the Earth, sun and moon come together again in perfect alignment. We then won’t see another here until May 2021.

We’re a people who love quirky events, and the coincidence of the blue moon, supermoon and blood moon has been widely reported with glee – and attracted some warnings from the supernatural realm.

Rose Smith, the head of Absolute Soul Secrets, which she describes as “the largest psychic network in the southern hemisphere’’, issued a press release warning that the settling-in period for the new school year will, “definitely be impacted by this unusual phenomenon happening across our skies in Australia”.

Ms Smith, who claims to be one of Australia’s “leading spiritual advisers’’ says the lunar events, “may send kids a little loopy for a few days”.

A series of blood moons in 2014 and 2015 caused some religious leaders to predict the end of the world was nigh. For children returning to school, maybe it just feels that way.

A super blue blood moon is on the horizon. Here’s what you need to know