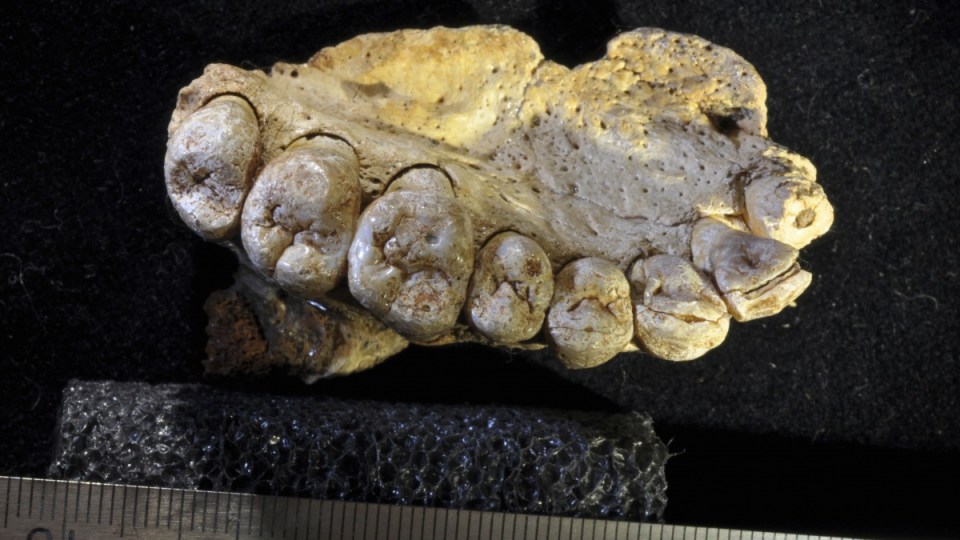 The find affects previous assumptions about when humans migrated from Africa. Photo: AAP

Modern humans were wandering out of Africa at least 180,000 years ago – some 60,000 years earlier than previously thought.

The new migration date comes after ancient stone tools and part of a fossilised Homo sapiens jaw bone with teeth were discovered in a cave in northern Israel.

The fossil jaw and tools, presented today in the journal Science, challenges currently accepted ideas about how modern humans dispersed from Africa, according to Peter Hiscock, an archaeologist at the University of Sydney.

While geneticists have traced the modern human’s emergence from Africa back around 60,000 to 80,000 years, “skeletal information excavated by archaeologists has told a much older story”, Professor Hiscock said.

Israel has long been an attractive site to look for evidence of modern humans making the move from Africa to Eurasia.

Caves in the north of the country have yielded many old hominid fossils and artefacts, including the previously oldest known Homo sapiens fossils outside Africa.

In 2001, Israel Hershkovitz from the University of Tel Aviv and his colleagues began excavating the Misliya Cave, near Mount Carmel.

It didn’t take long to strike gold. In 2002, a student found a partial jaw bone.

It comprised part of the upper jaw, including teeth, part of the cheekbone and roof of the mouth.

Professor Hershkovitz and his team examined the fossil’s anatomy to ascertain what species it belonged to.

While it shared some similarities with other hominid specimens such as Neanderthals, it seemed to fall in the Homo sapiens camp.

The teeth were large, for instance, but fitted within the normal range of a modern human’s chompers.

If the teeth belonged to a Neanderthal or an earlier hominid, they should have had broader tooth crowns or a different pattern of cusps (the bumpy bits on a molar’s chewing surface).

How to date a hominid

After establishing the jaw-owner’s species, it was time to find out how old it was.

Rainer Gruen, who was then at the Australian National University, was sent a “teeny, tiny bit of the tooth”.

Professor Gruen used a minimally destructive technique that “uses a quite large laser to burn tiny holes” to date the sample.

Two other labs dated the age of the sediment crust clinging to the fossil and burnt tools found nearby.

Are these our ancestors?

The owner of the jaw bone wasn’t necessarily part of the modern human population that went on to populate the world, said Professor Hiscock.

They may have moved back to Africa. Or maybe they died out.

“If that’s true, why did they die out and why were our ancestors able to move out when these people didn’t, given that they’re anatomically the same as us?” he said.

Perhaps, he added, our ancestors acquired cultural characteristics in Africa that allowed them to colonise the globe that these early modern humans didn’t have.

Tools found near the jaw bone, in Misliya Cave, also add to the story.

“You can get a piece of rock and quite quickly, knock off a fully formed tool. Per lump of rock, you can produce a lot more tools.”

Levallois tools have been uncovered in Europe that are almost 300,000 years old.

It was assumed they were made by Neanderthals, because modern humans didn’t make it that far until around 50,000 years ago, Dr Curnoe said.

But the new Misliya Cave fossil find raises the possibility that modern humans could have made it to Europe a lot earlier, he added.

“We don’t have the evidence yet, but it’s certainly possible. We can’t dismiss that idea outright.”