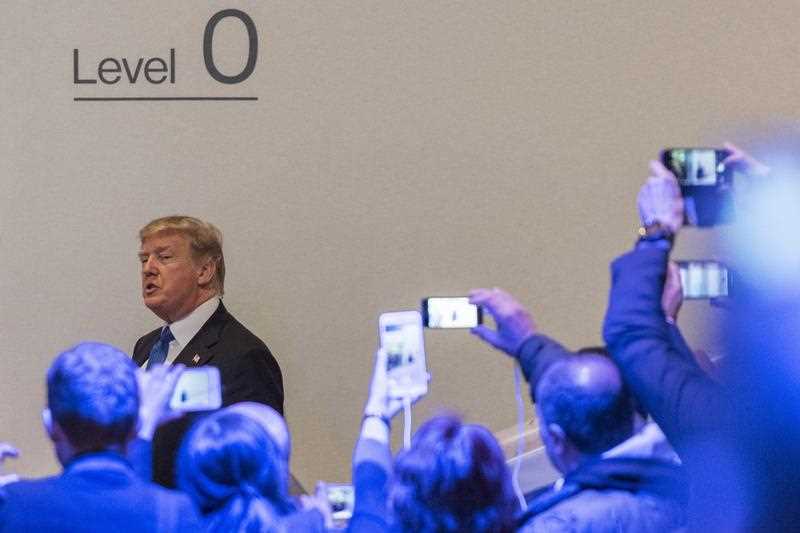 Donald Trump will be the first US president to attend Davos since Bill Clinton in 2000. Photo: Getty

President Donald Trump has arrived at the World Economic Forum in Switzerland to rub shoulders with the world’s globalists, while pushing his isolationist “America First” agenda.

Leaving behind some of the worst polling of any US president in history, Mr Trump arrived in the Swiss ski resort of Davos for two days of events culminating in a speech to the forum of business and political leaders on Friday (local time).

Mr Trump, never invited as a businessman, will be the first US president to attend Davos since Bill Clinton in 2000, giving him a chance to mingle with the same elite “globalists” he bashed in the 2016 election campaign.

Before leaving for Davos, Mr Trump posted a boastful tweet spruiking his and the US’ achievements on the economy.

“Will soon be heading to Davos, Switzerland, to tell the world how great America is and is doing,” Mr Trump tweeted before his departure.

“Our economy is now booming and with all I am doing, will only get better … Our country is finally WINNING again!”

Will soon be heading to Davos, Switzerland, to tell the world how great America is and is doing. Our economy is now booming and with all I am doing, will only get better…Our country is finally WINNING again!

And in a surprising about-face, Mr Trump hinted that the US may rejoin the Trans-Pacific Partnership if US negotiators could create a better deal.

“I would do TPP if we made a much better deal than we had. We had a horrible deal,” Mr Trump said in an interview with CNBC in Davos.

Australia, New Zealand, Canada and Japan are among the 11 Pacific nations that this week agreed to the controversial trade deal, which was jeopardised last year when Mr Trump pulled the US out.

Mr Trump said before departure he would also be pushing investment in the US economy while in Davos – something he claimed was already booming.

“I’m going to say: ‘Come into the United States. You have plenty of money’.

In the lead-up to his trip, Mr Trump slapped a 30 per cent tariff on imported solar panels, among the first unilateral trade restrictions imposed by the administration as part of a broader protectionist agenda.

Mr Trump has also used the trip for some diplomacy, meeting Israeli Prime Minister Benjamin Netanyahu.British Prime Minister Theresa May whose office confirmed a Trump visit to Britain was back on in 2018, after cancelling a trip there last year.

Great bilateral meeting with Prime Minister Theresa May of the United Kingdom, affirming the special relationship and our commitment to work together on key national security challenges and economic opportunities. #WEF18 pic.twitter.com/FPP8aRDAyt

Mr Trump has headed to Davos leaving behind the lowest average approval rating of any elected US president in his first term.

Polling by Gallup, which shows that Mr Trump has averaged just a 39 per cent approval rating since his inauguration.

The previous low was held by Bill Clinton, whose first-year average stood 10 points higher than Mr Trump’s, at 49 per cent.

One relative bright spot for Mr Trump is his handling of the US economy, though even there his ratings are not as high as might be expected given relatively strong figures.

Even Mr Trump’s “honeymoon period” saw his approval rating only reach as high as 45 per cent.

Since then, he has spent more time under 40 per cent than any other first-year president.

Presidents have recovered from periods of low popularity before. For example, Mr Clinton’s rating fell to just 37 per cent in June 1993 and he went on to win re-election.

Harry S. Truman held the approval of less than 40 per cent of Americans for significant chunks of his first term and was also re-elected. He went on to set Gallup’s lowest-ever approval mark, at just 22 per cent in 1952.

Mr Trump’s lowest point in Gallup’s weekly polling, 35 per cent, remains higher than Mr Truman, Richard Nixon and Jimmy Carter, who all saw their ratings dip under 30 per cent.

One bright spot is that 83 per cent of Republicans continue to approve of him, according to a recent Quinnipiac poll.