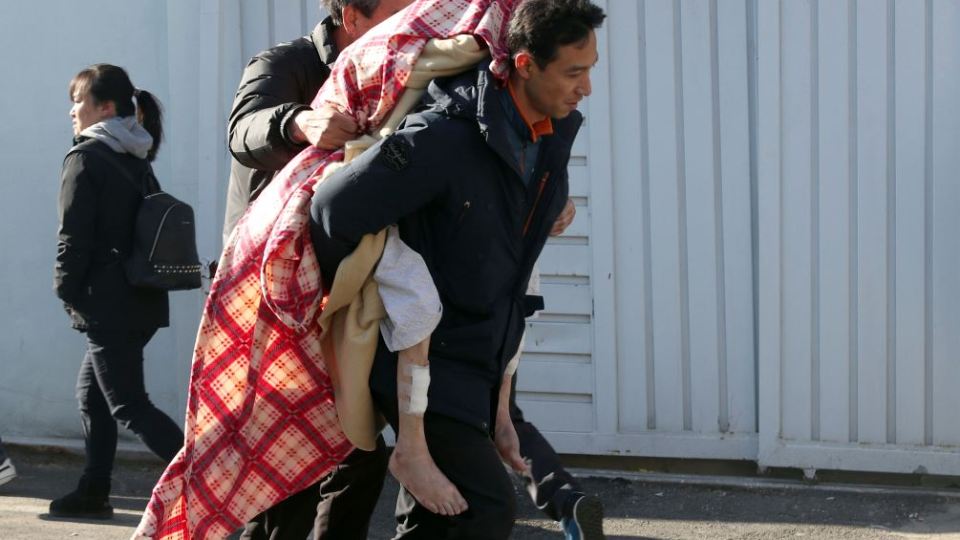 Draped in a blanket against the winter chill, a patient is carried from the burning hospital. AP/Kim Dong-min

A fire in a South Korean hospital hasleft 41 people dead and more than 70 injured, officials say, with eight of those injured listed as being in critical condition.

The fire started at around 7.30 am at the rear of the emergency room on the first floor of Sejong Hospital and was mostly extinguished after a few hours, Choi Man-woo, the head of Miryang city’s fire station, told a televised media briefing.
Miryang is about 270 km southeast of the capital, Seoul.

Firefighters evacuated about 200 people from the main hospital building and nursing home directly behind the hospital, Choi said.

Media footage showed at least one patient being carried from the hospital on another person’s back, covered in blankets.

Eight people were listed as critically injured and 69 slightly injured by 0153 GMT. Most of those who died were on the first and second floors of the hospital, Choi said.

There were no deaths from burns, he said, and officials were investigating the reason for the blaze.

Earlier on Friday, news channel YTN showed black smoke billowing from the windows and entrance to the hospital and flames flickering.

People evacuated from the hospital were being treated at four other hospitals nearby, YTN said.

In December, 29 people were killed in a blaze at an eight-storey fitness centre in Jecheon City, sparking anger at reports of shoddy construction, broken doors, blocked roads and other problems that may have contributed to the deaths.

The fire is the deadliest in South Korea in at least a decade. The presidential Blue House put the hospital fire death toll at 41.

President Moon Jae-in convened an emergency meeting with top aides and called on the government to take “all necessary measures” to help survivors.