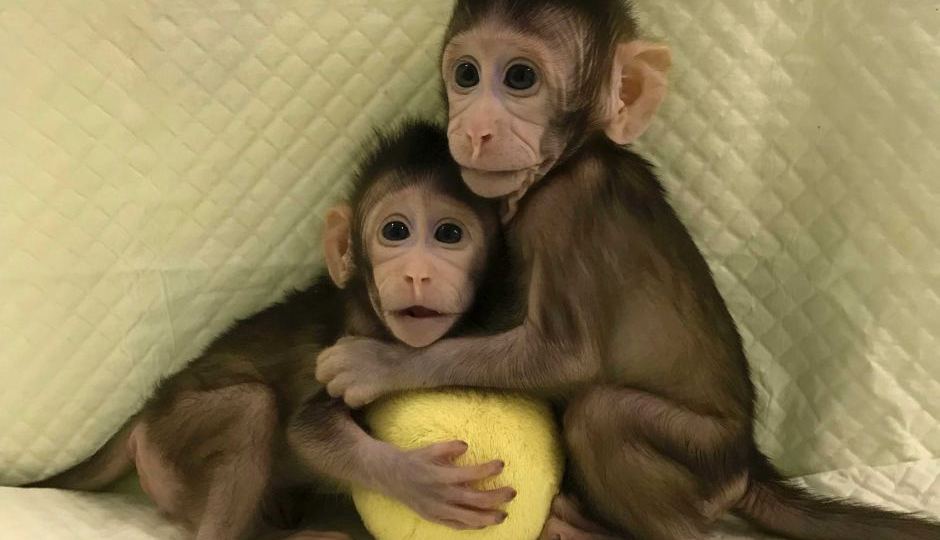 Cloned monkeys Zhong Zhong and Hua Hua are being bottle fed and are growing normally. Photo: Chinese Academy of Sciences

Chinese scientists have cloned the world’s first monkeys using the same technique that produced Dolly the sheep two decades ago.

Zhong Zhong and Hua Hua, two identical, long-tailed macaques, were born eight and six weeks ago, marking a scientific milestone that could open the possibility of cloning humans.

Since Dolly’s birth in 1996, researchers have copied nearly two dozen kinds of mammals, including dogs, cats, pigs, cows and ponies, and have also created human embryos with this method.

But until now they had been unable to make create primates this way, the category that includes monkeys, apes and humans.

“Humans are primates. So [for] the cloning of primate species, including humans, the technical barrier is now broken.”

However, while it brings the feasibility of cloning to the doorstep of our own species, Mr Poo says “there’s no intention” to do so.

Researchers hope their technique will make it possible to study diseases in populations of genetically uniform monkeys.

“The reason … we broke this barrier is to produce animal models that are useful for medicine, for human health,” Mr Poo said.

“There is no intention to apply this method to humans.”

According to Reuters, the procedure involved scientists removing the DNA-containing nucleus from monkey eggs and replaced it with DNA from the monkey foetus.

These reconstituted eggs grew and divided, finally becoming an early embryo, which was then placed into female monkeys to grow to birth.

The success rate of the technique however was extremely low – it took 127 eggs to produce two baby monkeys.

The two newborns are now being bottle-fed and are growing normally, according to researchers.

“The work in this paper is not a stepping-stone to establishing methods for obtaining live born human clones. This clearly remains a very foolish thing to attempt.”

The new research was published in the journal Cell on Wednesday.

Chinese scientists clone monkeys – humans could be next