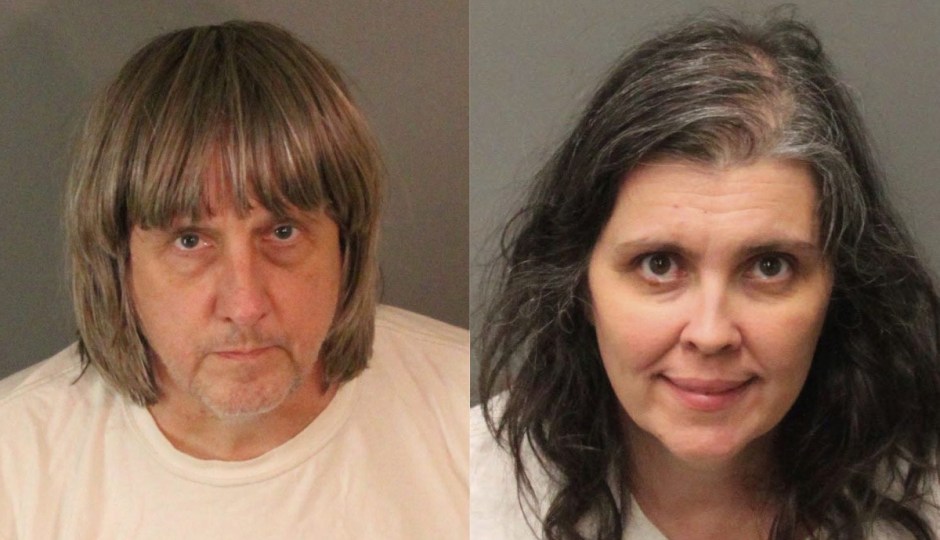 The siblings were malnourished and some shackled to beds in the family's filthy California home. Photo: Facebook/David-Louise Turpin

The eldest of 13 California siblings who authorities said were imprisoned by their parents was frail, smelly and picked on as a primary school student in Texas, one of her classmates has said in a heart-wrenching Facebook post.

The now 29-year-old woman was rescued with her starving brothers and sisters from their home in Perris, California, on January 14.

Neighbours and relatives said they were unaware of the children’s treatment until authorities arrested the parents and revealed what they found inside.

Taha Muntajibuddin attended kindergarten through to third grade with her in Fort Worth, Texas.

After learning of the case, he shared on Facebook his “overwhelming sense of guilt and shame” over how she was treated.

Mr Muntajibuddin, a paediatrics resident doctor in Houston, described her as, “a frail girl, had pin-straight hair with bangs, and often wore the same purple outfit”.

He wrote that it was jarring to learn the girl, who was teased in school for being smelly, “quite literally had to sit in her own waste because she was chained to her bed”.

“It is nothing but sobering to know that the person who sat across from you at the lunch table went home to squalor and filth while you went home to a warm meal and a bedtime story,” he wrote.

The post has elicited a strong reaction, with some condemning Mr Muntajibuddin for his behaviour as a child.

Others praised him for addressing it.

Mr Muntajibuddin said in an interview on Tuesday he was surprised by the reaction.

“It was just meant to be an honest lesson: take it or leave it,” he said.

The siblings have not been named because of the severity of the abuse allegations, which are still under investigation.

Mr Kirchner said he was unable to confirm when she enrolled or when she left school, or whether any of her younger siblings attended, because districts are only required to keep elementary student records for five years.

Another classmate, Stephanie Hernandez, said in a Facebook message the girl was quiet and always wore dirt-stained jeans that were too small.

Ms Hernandez, a registered nurse in Mansfield, Texas, said she often was bullied.

“I remember someone kind of slung her around like a rag doll,” she said.

Sheriff’s deputies arrested David Turpin, 57, and Louise Turpin, 49, after their 17-year-old daughter climbed out a window and called 911.

Authorities found the siblings, ages 2 to 29, in the family’s filthy California home, three of whom were shackled to beds and all except the youngest child malnourished.

The couple has pleaded not guilty to torture and other charges.

The resounding lesson: ‘Be nice’

The Riverside University Health System Foundation, which is collecting money for the siblings, has so far received 1500 donations totalling $US120,000, said spokeswoman Kim Trone.

People from across the world have also been sending toys, blankets and clothing, she said.

About 20 people, including nurses and psychologists, have offered to take the seven adult siblings and six minors and keep them together, said Mary Parks, a spokeswoman for the Riverside County Department of Public Social Services.

“People from around the country are offering to foster them and adopt them,” she said.

The siblings were all taken to hospitals, but Ms Parks said she could not discuss their conditions.

The agency typically seeks to place children with a relative and keep siblings together, she said.

Mr Muntajibuddin said he was hopeful his former classmate could recover and live an enriched life.

He said despite being bullied by her peers, she, “was still one of the most pleasant people I have had the opportunity to meet”.

“She had this whimsical optimism to her that couldn’t be dampened, couldn’t be doused no matter what anybody threw at her.”

He said he has learned from his experience and hopes others do, too.

“The resounding lesson here is a simple one, something that we’re taught from the very beginning,” Mr Muntajibuddin wrote.

California sibling tortured by parents was ‘bullied’ at school