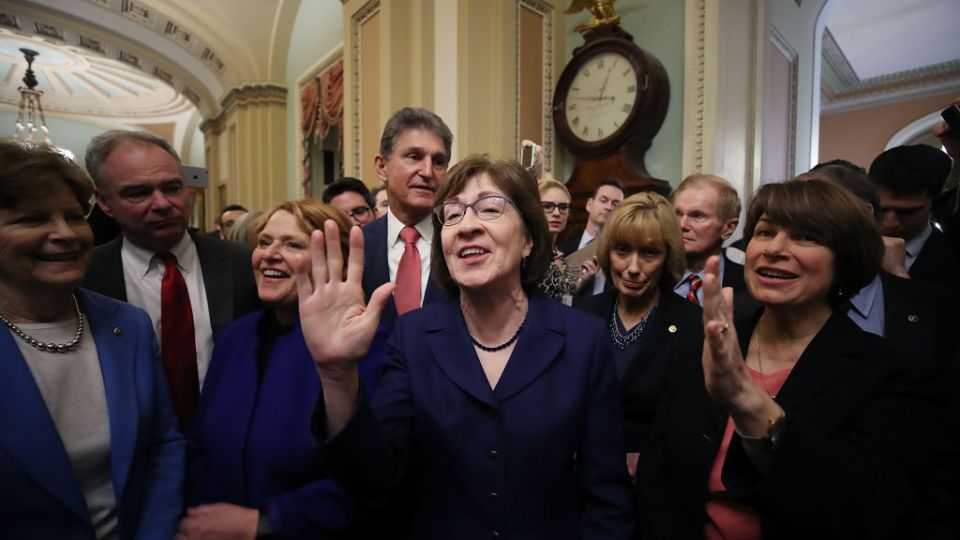 The Senate voted 81-18 on Monday to end the three-day old government shutdown, with Democrats joining Republicans to clear the way for the passage of a short-term spending package that would fund the government through February 8 in exchange for a promise from Republican leaders to address the fate of young, undocumented immigrants known as Dreamers.

“In a few hours, the government will reopen,” said Senator Chuck Schumer of New York, the Democratic leader. “We have a lot to do.”

The procedural vote does not immediately end the shutdown. The Senate must still grant final approval of the bill, and it must then be approved by the House.

But final passage is a formality, and after a weekend of partisan finger-pointing – in which Democrats branded the shutdown the “Trump Shutdown”, after President Trump, and Republicans branded it the “Schumer shutdown” – the vote offered both parties a way out of an ugly impasse that threatened to cause political harm to both parties.

Senator Schumer, speaking on the Senate floor, announced that he and Senator Mitch McConnell of Kentucky, the Republican leader, had “come to an arrangement” to adopt the three-week spending measure while continuing to negotiate a “global agreement” that would include the fate of the dreamers, undocumented immigrants brought to the country as children.

Monday’s vote came after a frantic weekend of work by a bipartisan group of more than 20 senators, who on Sunday night were discussing a plan in which the government would stay open through early February, coupled with a promise from Senator McConnell to allow a vote on a measure to protect the Dreamers from deportation.

Senator McConnell pledged Monday morning that he would permit a “free and open debate” on immigration next month if the issue had not been resolved by then. But his promise was not enough for many Democrats, and on Monday morning, moderate Senate Democrats were still pressing for more in exchange for their votes to end the shutdown.

By the time of the vote just after noon on Monday, the moderate Democrats were predicting the vote would pass.

“We’re going to vote to reopen the government,” Senator Mark Warner of Virginia, a Democrat whose state is home to thousands of federal workers, told reporters.

Senator Angus King of Maine, an independent who caucuses with Democrats, said he was a “strong” yes.

“I said before trust but verify,” he said of Senator McConnell. “He made this commitment publicly in the Senate floor. He was much more specific than he was last night. And frankly I think this is an important opportunity for him to demonstrate that he will carry through.”

‘Put this mess behind us’

Senator McConnell said on Monday morning that the Senate would move ahead with a scheduled procedural vote at noon on a proposal to fund the government through February 8, and he urged his colleagues to put an end to the shutdown.

“Every day we spend arguing about keeping the lights on is another day we cannot spend negotiating DACA or defense spending or any of our other shared priorities,” Senator McConnell said, referring to Deferred Action for Childhood Arrivals, the program put in place by the Obama administration that shields young undocumented immigrants from deportation.

Senator McConnell reiterated a pledge he offered on Sunday night that he intended for the Senate to take up immigration legislation in February if the issue has not been resolved by then. A major question as senators seek to end the shutdown is what kind of commitment Senator McConnell is willing to make regarding the consideration of legislation for the young immigrants, a central issue in the current impasse.

On Monday, Senator McConnell pledged that the Senate’s immigration debate would have “a level playing field at the outset and an amendment process that is fair to all sides.”

“The very first step is ending the government shutdown,” he said.