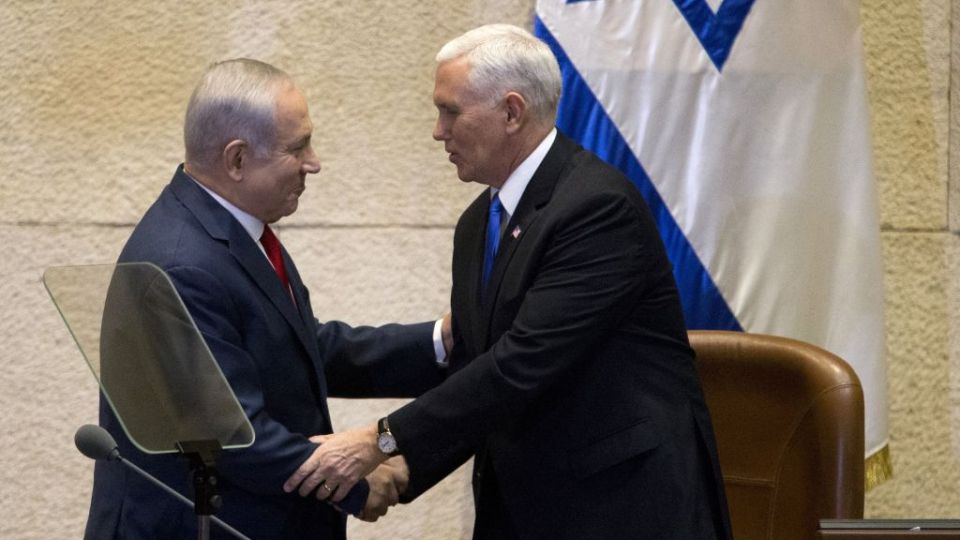 US Vice-President Mike Pence has received a rapturous reception in the Israeli parliament after declaring that America will move its embassy to Jerusalem by the end of 2019.

President Donald Trump last month recognised Jerusalem as the capital of Israel and said he would move the US embassy there – dismaying Palestinians who claim the eastern part of the city.

The Vice-President used his speech to highlight and underscore Mr Trump’s controversial decision, a significant American policy shift that has stoked Palestinian anger and international concern.

“President Trump has made preparations to immediately move the US embassy from Tel Aviv to Jerusalem,” Mr Pence said to loud applause from his audience of Israeli politicians and dignitaries.

“That embassy will open before the end of next year.”

Mr Pence said Mr Trump had “made history” and “righted a 70-year wrong” when he declared Jerusalem as Israel’s capital.

“American stands with Israel because your cause is our cause, your values are our values, your fight is our fight, right over wrong, good over evil,” Mr Pence said in his speech.

The Vice-President was careful to point out that the US supported maintaining the status quo in regards to holy sites in Jerusalem.

He also told the Knesset that if all sides agreed, the US would support a two-state solution between the Israelis and the Palestinians.

This particular statement was met with a standing ovation from Israel’s opposition, but reporters attending the speech noted that Israeli Prime Minister Benjamin Netanyahu did not applaud after Mr Pence made those remarks.

Mr Netanyahu did however thank Mr Pence for standing up for the “truth” and supporting Israel at the United Nations.

He told the Vice-President that Mr Trump’s decision to recognise Jerusalem would go down as one of the most historic in Israel’s history, and lauded the unbreakable alliance between the countries, saying they had a “shared destiny”.

The Vice-President’s speech was briefly interrupted at the beginning when a handful of Arab members of the Israeli parliament jumped to their feet holding signs saying Jerusalem was the capital of Palestine.

The members of parliament were quickly surrounded by Israeli security and pushed out of the chamber.

Chief Palestinian negotiator Dr Saeb Erekat later tweeted that Mr Pence’s “message to the rest of the world is clear: violate international law and resolutions and the US will reward you”.

“The messianic discourse of Pence is a gift to extremists and has proven that the US administration is part of the problem rather than the solution,” he tweeted.

The Palestinian leadership, which is boycotting Mr Pence’s visit over the Jerusalem move, tried to hijack the moment in the Knesset.

At the same time Mr Pence took to the microphone to address the audience, Palestinian President Mahmoud Abbas took to the stage in Brussels, urging EU leaders to recognise a state of Palestine immediately with East Jerusalem as its capital.

Mr Abbas also struck a more diplomatic tone than in his recent public remarks, including earlier this month when he said he would only accept a broad, internationally-backed panel to broker any peace talks with Israel.

“We are keen on continuing the way of negotiations,” he said.

“We are determined to reunite our people and our land.”

Mr Pence also used his speech to lambast the Obama administration’s Iran deal, saying that if it was not fixed within a matter of months, “the US will withdraw from the Iran nuclear deal immediately”.

US embassy to open in Jerusalem before end of 2019: Mike Pence