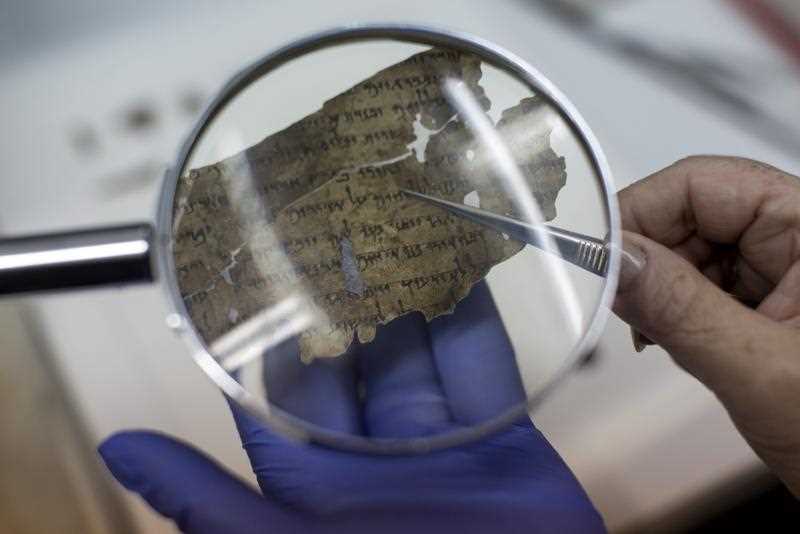 The ancient Jewish manuscripts were found in the Qumran Caves near the Dead Sea. Photo: EPA

A decades-old mystery has been deciphered in one of the last remaining parts of the 900 Dead Sea Scrolls that date back to at least the 4th century BC.

Researchers of the Department of Bible Studies at the University of Haifa in Israel spent more than a year carefully reassembling more than 60 tiny sections written in secret code.

They decrypted the ancient code through annotations in the margins written by a second scribe correcting the errors made by the author.

What exactly is written in Dead Sea Scrolls?

They are the oldest copy of the Bible yet found.

They consist of two types:

There are 900 Qumran Scrolls that were uncovered in the 1940s-1950s, around the site known as Wadi Qumran near the Dead Sea in the West Bank (of the Jordan River).

What did they find?

By deciphering one of the last remaining scrolls, Dr Eshbal Ratson and Professor Jonathan Ben-Dov have revived special occasions celebrated by the ‘Qumran sect’ (who wrote the scrolls), that observed a unique 364-day calendar.

According to the researchers, this calendar was involved in one of the fiercest debates between different groups during the late Second Temple period.

“The lunar calendar, which Judaism follows to this day, requires [many] human decisions,” Dr Ratson and Professor Ben-Dov said.

“People must look at the stars and moon and report on their observations, and someone must be empowered to decide on the new month and the application of leap years.

“By contrast, the 364-day calendar was perfect. Because this number can be divided into four and seven, special occasions always fall on the same day.”

Festivals that were never written in the Bible before:

The present scroll describes two special occasions not ever mentioned in the Bible: the festivals of ‘New Wine’ and ‘New Oil’.

These dates constituted an extension of the festival of Shavuot as we know it today, which celebrates the ‘New Wheat’.

Wait. What is Shavuot?

Shavuot is one of the Jewish harvest festivals, also known as the festival or feast of ‘Weeks’.

There is no set date for the two-day festival, but it takes place seven weeks (50 days) after the first day of the spring festival of Passover.

According to the newly discovered calendar:

A celebration day is finally named

A further discovery is also found in the scroll.

The researchers were aware from the previously decoded scrolls that the members of the sect celebrated the transition between the seasons, adding a special day for each of the four changes of season.

Until now, however, the name of these special days has remained unknown.

The present scroll reveals that these days were referred to by the word “Tekufah”.

In today’s Hebrew, “Tekufah” translates into the word “period”.

“This term is familiar from the later Rabbinical literature and from mosaics dating to the Talmudic period, and we could have assumed that it would also be used with this meaning in the scrolls, but this is the first time it has been revealed,” Dr Ratson and Professor Ben-Dov explain.

By 2001, most of the official editions had been published and were in academic libraries.

Thanks to the recent translation in Israel, one scroll remains unpublished.