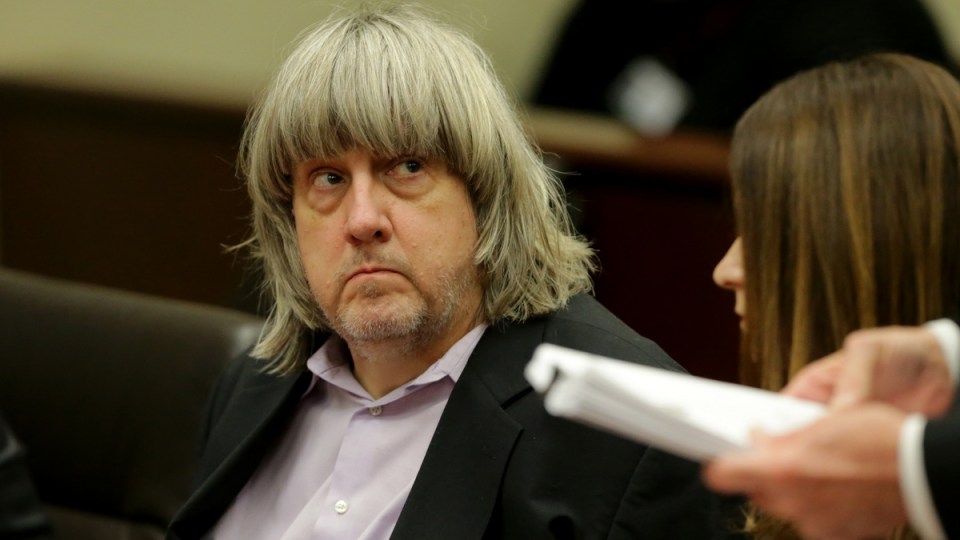 David and Louise Turpin are accused of holding their 13 children captive. Photo: Getty

Details about the private life of torture house parents David and Louise Turpin have been aired on US television by a family member.

“She never smoked a cigarette or drank a drink of alcohol or anything, and close to her 40th birthday … she called me and she thought it was cool that they had quit going to church,” Ms Robinette said.

“The older children were helping her take care of the younger children so her and David could sow those wild oats that she didn’t sow when she was younger.”

Last week David Turpin, 57, and Louise Turpin, 49, were each charged with 37 counts of torture, abuse and false imprisonment after police found their 13 malnourished children tied up inside their Southern California home.

The first time the Turpins “ever” went to a bar, Louise told Ms Robinette about the experience, she said: “She called me the very first time she was drunk, she was very giggly.”

According to Ms Robinette, during the couple’s experimentation period David drove his wife to another state so she could have sex with another man the couple met online.

“It was a very weird thing to me,” said Ms Robinette.

“She told me that her and David had met a man online from Huntsville, Alabama, and that they were on their way there to meet him and that she was going to sleep with him.

“David was OK with that … David dropped her off.”

Ms Robinette said that “what makes it even worse and even weirder” is that one year after the motel tryst with the other man, Louise and David spent a night in the same rented room.

Becoming emotional as she spoke to host Megyn Kelly, Ms Robinette said she would not forgive her sister for what she had allegedly done to her children.

“Louise no longer exists to me. Her and David are dead to me,” she said.

“The children, I hope, when they come out of from where they’re at now, our hope is that they all can lead some sort of normal or happy existence.

“They obviously have never known happy, except maybe the older ones for a little while.

“My main hope is that I can put my arm around them and just tell them that they have family that loves them, that’s not deranged, that this is what it’s supposed to be like.”

Riverside County district attorney Mike Hestrin told a January 18 press conference that the children, aged two to 29, were tied up for “weeks or even months as a punishment and were not even released from their shackles to go to the bathroom.

“This is severe, emotional, physical abuse … This is depraved conduct,” he said.

The Turpin children are now reportedly being cared for by mental and physical heath professionals.

Ms Robinette only met the eldest four children in person, but said she Skyped with some of the others a few years ago.

“They were very friendly, but it was a very weird conversation every time because they weren’t real talkative,” she said.

Nearly a week after the Turpins were arrested, CCTV footage which purportedly shows some of the children leaving their home has been released.

Children are seen walking around the family’s silver van outside their home, with some being carried by older siblings.