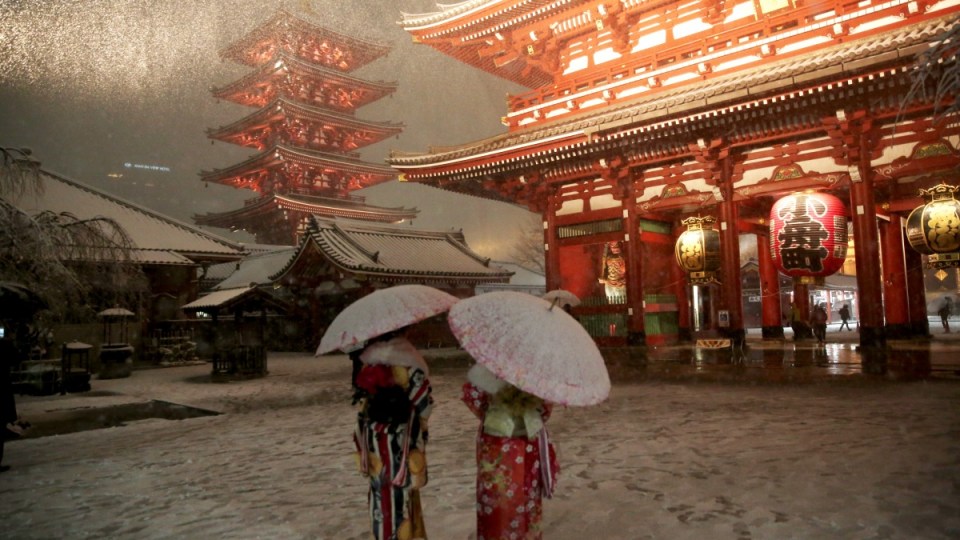 Australian passengers are among those facing delays in Japan as a rare snow storm hits Tokyo. Photo: AAP

A number of Australians have been left stranded in Japan after a rare winter snow storm struck Tokyo, forcing the cancellation of 250 international flights.

An estimated 23 centimetres of snow had fallen in the centre of the Japanese capital by Tuesday morning, with freezing temperatures snarling traffic and causing ongoing transport disruptions.

Kyodo news agency reported it was the city’s heaviest snowfall in four years.

A Qantas flight due to leave the Haneda Airport at 10pm on Monday was delayed by nearly four hours because of the weather.

A Korean aircraft was de-iced twice and airport staff worked frantically to snowplough the runways.

Sydney mum Sally Quinn was stranded trying to get home after skiing with her family for ten days at popular resort Niseko.

“My son and I are both sick, this is the last thing we need,” she told AAP at the airport.

University student Tom Waddington, 20, had been on a snowboarding holiday with his family at Myoko for a week.

The family of six caught Tokyo trains and the monorail to the airport and were shocked by the sardine factor.

“It was pretty hectic,” he told AAP.

“So many people were shoving on to the trains.”

It’s understood at some ski fields buses with Australian skiers aboard couldn’t get through the thick snow, causing some passengers to miss their flight entirely.

As of Tuesday afternoon, most commuter lines were operating normally but a number of trains were canceled and highways remained closed.

More than 740 traffic accidents due to the snow were reported, and 67 people were injured from falls as of last night, Japanese public broadcaster NHK said.

Canceled flights and a lack of transport also stranded 6000 people at Narita airport overnight, according to local reports.

The government issued heavy snow warnings for the area around the capital, just two weeks after hundreds of people were trapped overnight in a train in northern Japan because of heavy snow.

The NHK reported universities had postponed entrance exams due to have been held on Tuesday morning.

A looming low pressure system and cold front just off the coast of Japan’s main island of Honshu was expected to bring low temperatures and more snow throughout the day and night, the Japanese Meteorological Agency said.

The Japanese capital often sees snow at least once a year, but this time it was accumulating, rather than quickly melting.

A disaster management centre in the prime minister’s office was collating information on the situation.

“We will respond to this based on various scenarios,” Chief Cabinet Secretary Yoshihide Suga said in a news conference.

“We call on all citizens to keep informed about the latest conditions and beware of transport delays.”