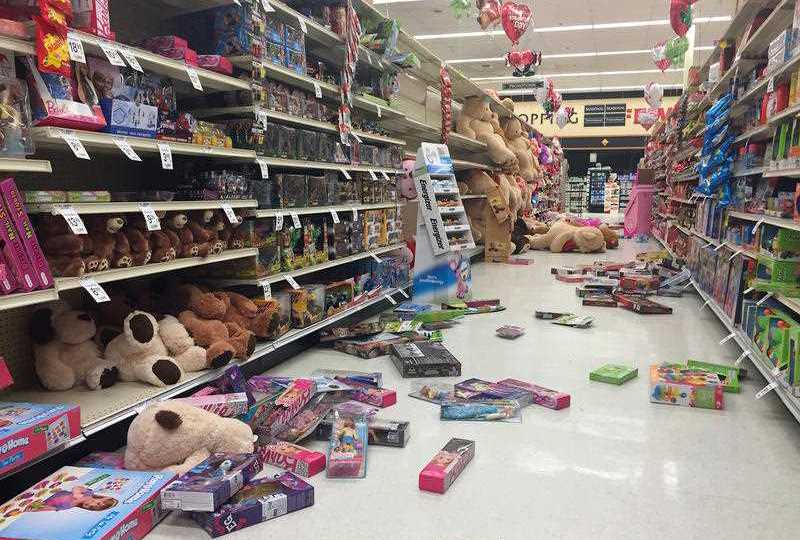 Items fallen from the shelves litter the aisles in a store in Alaska after a quake in 2016. Photo: AP

Tsunami warnings have been cancelled after a magnitude-7.9 earthquake hit the Gulf of Alaska in the early hours of Tuesday.

Officials at the National Tsunami Centre cancelled the warning after a few tense hours when waves failed to show up in coastal Alaska communities.

Alaska’s Division of Homeland Security and Emergency Management said there have been no reports of damage, so far.

Mickey Varnadao, a computer specialist with the warning centre in Palmer, Alaska, said early on Tuesday that an advisory remains in effect for parts of Alaska, from Kodiak Island to Prince William Sound.

Watches were cancelled for Washington, Oregon, California and Hawaii.

Earlier, tsunami warnings for parts of Alaska and Canada and a tsunami watch for the entire US west coast were issued.

A tsunami watch was also issued for Hawaii but was later cancelled.

Officials in Japan also said there was no tsunami threat there.

The quake, initially measured at magnitude-8.2, hit 256 kilometres south-east of Chiniak, Alaska at a depth of 25km at 0931 GMT, the US Geological Survey said.

“If you are located in this coastal area, move inland to higher ground. Tsunami warnings mean that a tsunami with significant inundation is possible or is already occurring,” Anchorage Office of Emergency Management said in a warning for Alaska and British Columbia.

“Based on all available data a tsunami may have been generated by this earthquake that could be destructive on coastal areas even far from the epicentre,” the Pacific Tsunami Warning Centre said.

Police in Kodiak, an island in the gulf of Alaska, warned residents to get at least 30.5 metres above sea level.

In a video posted to their Facebook page, an officer told residents that while Pillar Mountain was safe, it was full and could not be accessed within five or 10 minutes. The officer instead directed residents to the local high school car park.

Japan’s meteorological agency said it was monitoring the situation but did not issue a tsunami alert.

One Kodiak resident tweeted a video in which the tsunami sirens can be heard and wrote that hearing the sound at 1:00am on a Tuesday was “terrifying”.

tsunami sirens going off in kodiak after the earthquake, i usually only ever hear the weekly siren test at 2pm on wednesdays so hearing it at 1am on tuesday is actually terrifying!! pic.twitter.com/ea5y7U6xnf

Meanwhile, homes and buildings have collapsed and dozens of people have been injured after a magnitude-6.1 earthquake in Indonesia.

The quake struck at 5:34pm (EST) on Tuesday around 80 kilometres off the coast of West Java, but there was no threat of tsunami.

Local authorities say hundreds of buildings have been damaged, including mosques, a hospital and dozens of homes.

The tremor was also felt in Jakarta, more than 200km away, where high-rise buildings swayed back and forth before being evacuated.

There were some reports of panic in the capital, as people fled outside to safety.

So far there have been 11 aftershocks reported by authorities.

In West Java’s Cianjur province six students were badly injured when the roof of their school collapsed. Two other students suffered minor injuries.

A school hall also collapsed in Pandeglang City, but no one was injured.

“Southern Java is prone to earthquakes,” he said.

“If you feel the ground shaking, leave your home and find a safe place.”

On Boxing Day 2004, a magnitude-9.1 quake struck off the west coast of Sumatra, sparking a series of tsunamis that killed more than 250,000 people.