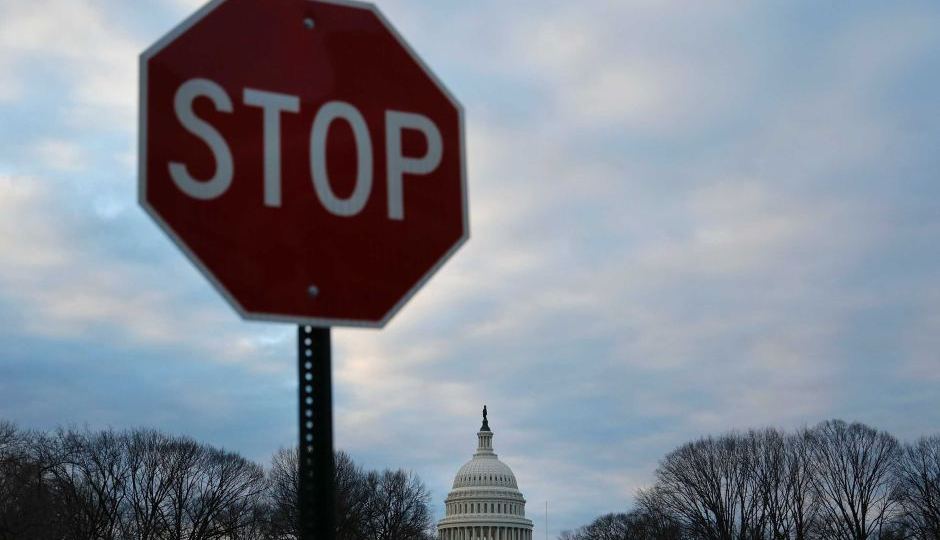 As US senators struggle to reopen the government, callers to the White House have been greeted with an answering machine message saying the phone line is closed because opposition Democrats are “holding Government funding hostage”.

The message follows an unsuccessful vote to extend Government funding for a month while a long-term budget bill can be worked out between Republicans and Democrats, who say any bill must include protections for “Dreamers”.

The resulting shutdown means non-essential services including major landmarks, many civilian military personnel and White House phone lines are unmanned because wages can not be paid.

The White House has blamed the shutdown on Democrats, calling them “obstructionist losers” and accusing them of being more interested in illegal immigrants than in national security.

“They could easily have made a deal but decided to play shutdown politics instead,” President Donald Trump said.

Over the weekend, Americans calling the White House comments line discovered it was repeating this message:

“Thank you for calling the White House. Unfortunately, we cannot answer your call today because congressional Democrats are holding government funding — including funding for our troops and other national security priorities — hostage to an unrelated immigration debate,” it said.

Listen to the White House voicemail below:

saw this going around and wanted to check for myself: here’s the message you hear today when you ring the White House comment line during the shutdown pic.twitter.com/sCquYj0XnX

“Due to this obstruction, the Government is shut down. In the meantime, you can leave a comment for the president at www.whitehouse.gov/contact. We look forward to taking your calls as soon as the Government re-opens.”

Recordings of the message were shared on social media along with commentary on what it says about the Trump administration.

Some went beyond disbelief to anger, calling the message not childish but un-American.

Republican and Democratic leaders of the US Senate are continuing to try to break the shutdown impasse, after a Senate session adjourned late on Sunday (US time) with no result.

The Senate will vote at noon on Monday to reopen the government, however passage has not been assured.

Under Senate rules, the bill needs 60 votes in the 100-member chamber to overcome blocking tactics by opponents.

The Republicans currently have 51 senators and would need some Democratic support to pass a budget.

Reports suggest Democratic senators could vote to reopen the Government on Monday afternoon in return for a promise by majority Republicans to deal with Democrats’ immigration concerns in coming weeks – but no deal has been confirmed.

Democrats say short-term spending legislation must include protections for illegal immigrants brought to the United States as children, known as “Dreamers”.

Senate Majority Leader Mitch McConnell also offered an olive branch to Democrats when he pledged in remarks on the Senate floor to bring immigration legislation to a floor debate in early February if the issue had not been dealt with by then.

“It would be my intention to proceed to legislation that would address DACA, border security and related issues,” Mr McConnell said, adding: “It is also my intention to take up legislation on increased defence spending, disaster relief and other important matters” then.