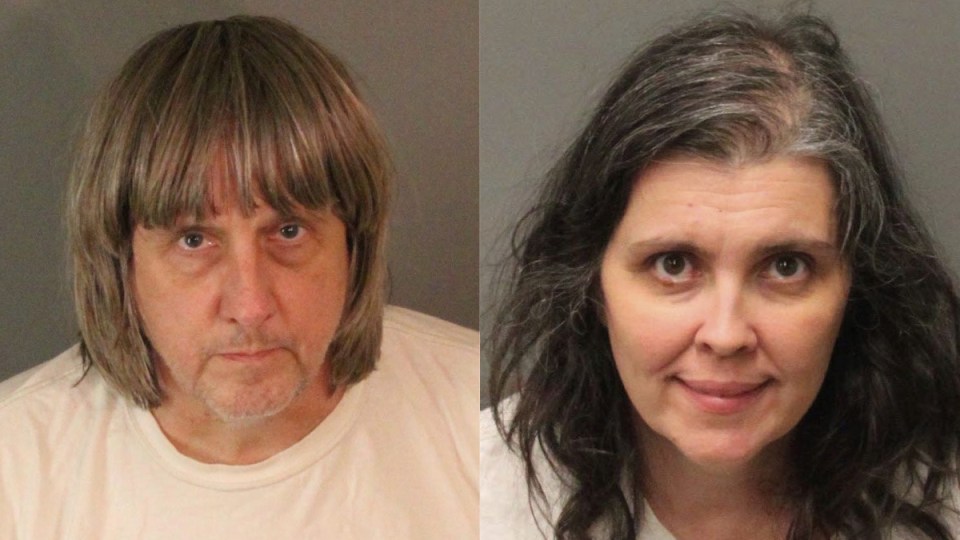 David Turpin and Louise Turpin have pleaded not guilty to all charges. Photo: AAP

According to a report in Crime Watch Daily, a syndicated news show in the United States, there were “serious discussions” about bringing in dogs to help the investigation.

Crime Watch Daily also reported that investigators were considering doing DNA tests on the Turpin children to check if they were all related.

While the report did not quote any police or investigators, it said the revelations had come from sources close to the investigation.

Parents David Allen Turpin, 57, and Louise Anna Turpin, 49, have been charged with more than two dozen counts of torture, child abuse and false imprisonment and face 94 years to life in prison if convicted.

The Turpins, who are accused of torturing their 13 children at their house by chaining them to their beds for “months at a time” as punishment, have pleaded not guilty to all charges.

David Turpin was also accused of sexually abusing one of his young daughters.

The judge set bail at $15 million each, with the Turpins due to reappear in court at the end of February.

UK newspaper, The Independent, reported that it had contacted the Sheriff’s Department in Riverside County and the police department in the City of Perris, California, to verify the report, but neither responded to paper’s requests for comment.

The Turpin siblings, aged two to 29, were rescued from the house in Perris after a 17-year-old girl escaped out of a window and called the police on January 14 – an escape she had reportedly plotted over two years.

Police found all 13 siblings to be severely malnourished and as a result some had cognitive impairment and a lack of basic knowledge of life.

It confirmed a 29-year-old female victim weighed just 37 kilograms, while a 12-year-old victim was only the size of an average seven-year-old.

Police found some of the children shackled to beds with chains and padlocks in the dark.

Riverside County District Attorney Mike Hestrin told ABC News in the US that that police had also recovered “hundreds of journals” from the home which would hopefully provide “powerful evidence” on events inside the “house of horrors”.

“My guess is that’s going to be powerful evidence about what was happening from the perspective of the victims,” Mr Hestrin told ABC.

Meanwhile, there have been claims that David Turpin ‘kidnapped’ his wife when she was a 16-year-old Year 10 student.

Louise Turpin’s sister Teresa Robinette and half-brother Billy Lambert told DailyMailTV that Turpin signed his future wife out of Princeton Senior High School and drove her 1600 kms across the country.

“The day he came and picked her up from school, I was told he told her that if she would elope with him and marry him he would give her everything she ever wanted,” said Ms Robinette.

According to the family members, when Turpin and the then-Louise Robinette were tracked down in Texas, they came home and Robinette’s family gave permission for her to marry Turpin, eight years her senior.

Louise Turpin’s parents both died in 2016 and she reportedly didn’t attend their funerals, claiming she couldn’t bring all of her children back home with her.

Police fear other Turpin children may have died inside house: Report