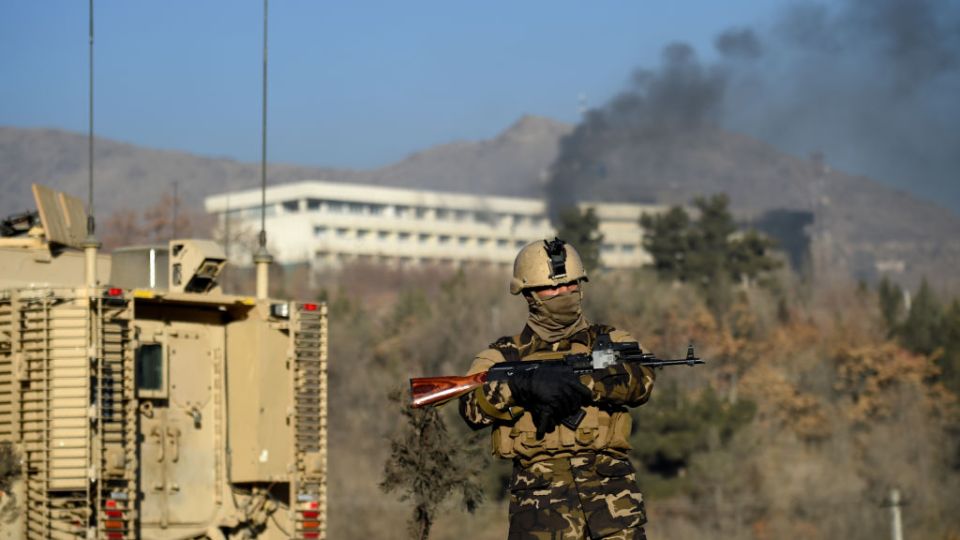 Special forces battled with the gunmen for 12 hours. Photo: Getty

At least 18 people are dead after a 12-hour siege at Kabul’s Intercontinental Hotel ended on Sunday.

Taliban gunmen dressed in army uniforms stormed the hotel at the weekend, with Afghan Special Forces confirming they had killed the last gunman on Sunday (local time).

Figures on the death toll had varied greatly on Monday morning, but US media outlet CNN eventually claimed 18 had died, with the BBC reporting that 14 of those were foreigners and four Afghans.

The Taliban claimed responsibility for the attack, which forced 153 guests and staff flee, including 41 foreigners, with some shimmying down tied-together sheets from upper-floor windows and others rescued by Afghan forces.

Abdul Rahman Naseri, a guest who was at the hotel for a conference, was in the hall of the hotel when he saw four insurgents dressed in army uniforms.

“They were shouting in Pashto (language), ‘Don’t leave any of them alive, good or bad. Shoot and kill them all,’ one of them shouted,” Naseri said.

“I ran to my room on the second floor. I opened the window and tried to get out using a tree but the branch broke and I fell to the ground. I hurt my back and broke a leg.”

Even after officials said the attack was over, sporadic gunshots and explosions could be heard from the site.

As day broke on Sunday, thick clouds of black smoke could be seen pouring from the building. Several armoured US military vehicles with heavy machine guns could be seen close to the hotel along with Afghan police units.

Hotel manager Ahmad Haris Nayab, who escaped unhurt, said the attackers had got into the main part of the hotel through a kitchen before going through the hotel, with many guests trapped in their rooms.

“When the sixth floor caught fire this morning, my roommate told me, either burn or escape,” said Mohammad Musa, who was hiding in his room on the top floor when he heard gunfire.

The raid came just days after a US embassy warning of possible attacks on hotels in Kabul.

Security has been tightened in Kabul since last May, when a huge truck bomb killed at least 150 people.

There have also been several attacks in recent months, including a bomb at a Shia cultural centre last month that killed more than 40 people.

The Intercontinental Hotel, an imposing 1960s structure set on a hilltop and heavily protected like most public buildings in Kabul, was previously attacked by Taliban fighters in 2011.