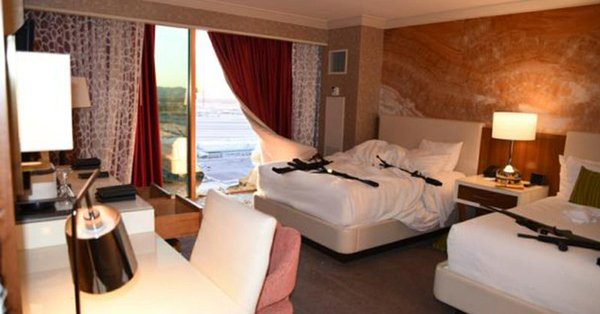 Paddock set up a sniper’s nest in adjoining suites on the 32nd floor of the Mandalay Bay casino and fired down at an open air country music concert below killing 58 people and injuring more than 700 others.

Marilou Danley, who was in the Philippines at the time of last year’s massacre, initially had been described as a “person of interest” by Sheriff Lombardo but the exhaustive ongoing probe by police and the FBI is yet to find evidence she was involved.

Speaking to reporters at the release of the preliminary report, Sherrif Lombardo said  ”there was only one person responsible and that was Stephen Paddock”.

“We do not anticipate charges being brought forward against Marilou Danley,” he said.

The final police report could take years to conclude.

This morning @Sheriff_LVMPD met with the media to announce the release of a preliminary investigative report regarding #1October. You can view the report here: https://t.co/bZyQMoS89b as well as on our website. #LVMPDnews pic.twitter.com/3dg2vnfA2x

The preliminary report does offer new insight into Paddock’s warped mind and the planning that went into the massacre, including confirmation he scouted other open air concerts in Las Vegas and Chicago and the discovery of child pornography on his laptop computer.

Danley also offered insight into her deteriorating relationship with Paddock and his odd behaviour weeks before the shooting when they stayed at the Mandalay Bay.

“Danley stated Paddock’s demeanor changed over the course of the last year,” the preliminary report states.

“According to her, Paddock had become ‘distant’ and their relationship was no longer intimate.

“Paddock was described as ‘germaphobic’ and had strong reactions to smells.

“Over the course of the last year Paddock began to buy firearms and Danley believed it was a hobby of his.”

According to police, Danley said that during their early September stay at the Mandalay Bay, Paddock was “behaving strangely” and looking out the windows toward the Las Vegas Village venue where the three-day concert would be held later in the month.

“The two were staying in room 60-235 and she observed Paddock constantly looking out the windows of the room which overlooked the Las Vegas Village venue,” the report states.

“Paddock would move from window to window looking at the site from different angles.”

Danley, 62, an Australian citizen, was born in the Philippines and is believed to have lived in Australia for about 10 years before moving to the US in 1989.

They found no evidence of Paddock being radicalised by an ideology or supporting or following “any hate groups or any domestic or foreign terrorist organisations”.

And here are Paddock's Google search queries pulled from the labtop inside the hotel room.

Investigators also found Paddock “was indebted to no one and in fact paid all his gambling debts off prior to the shooting”.