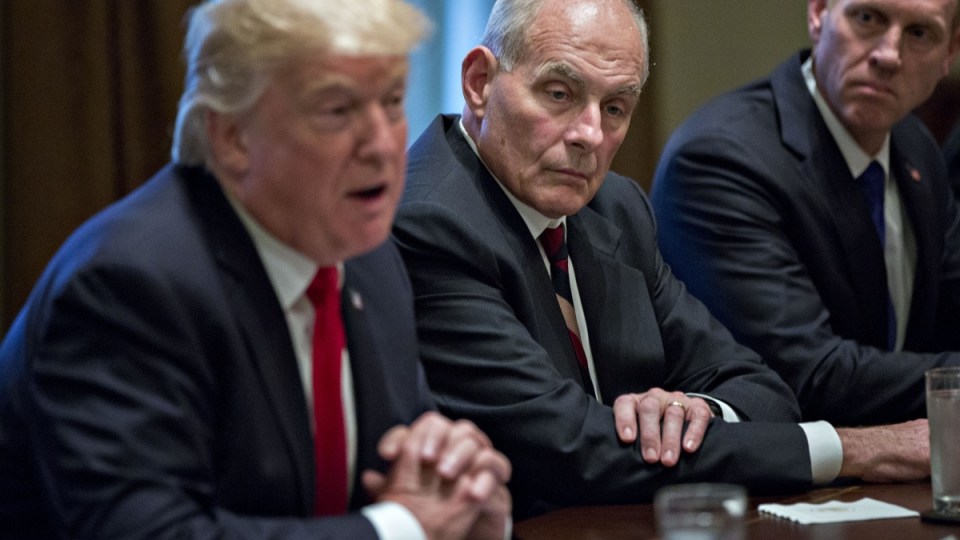 Donald Trump has contradicted his top aide, saying his idea for the border wall with Mexico hasn't evolved. Photo: Getty

President Donald Trump says his concept of a wall along the US border with Mexico “has never changed or evolved”, contradicting comments made by his chief of staff, John Kelly.

Mr Kelly told Hispanic lawmakers during a Wednesday meeting that some of Trump’s immigration views during the campaign were “uninformed”, according to reports in the Washington Post and New York Times.

In an apparent rebuke of Mr Kelly, President Trump wrote on Twitter on Thursday: “The Wall is the Wall, it has never changed or evolved from the first day I conceived of it.”

The Wall is the Wall, it has never changed or evolved from the first day I conceived of it. Parts will be, of necessity, see through and it was never intended to be built in areas where there is natural protection such as mountains, wastelands or tough rivers or water…..

During the campaign, Mr Trump’s supporters cheered whenever he promised a barrier along the 3200 km US-Mexico frontier to keep out drug smugglers and undocumented immigrants and have Mexico pay for it.

Since taking office, he has acknowledged there were geographical barriers such as mountains and rivers along the border where a wall would not be necessary.

“The Wall will be paid for, directly or indirectly, or through longer term reimbursement, by Mexico, which has a ridiculous $US71 billion dollar trade surplus with the US,” Mr Trump said on Twitter on Thursday.

However his reasoning behind the wall remains the same.

“We need the Wall for the safety and security of our country,” he wrote.

“We need the Wall to help stop the massive inflow of drugs from Mexico, now rated the number one most dangerous country in the world. If there is no Wall, there is no Deal!”

The President’s comments come after Mr Kelly reportedly told Democratic politicians that the US will never erect a wall along its entire southern border and that Mexico would not pay for it, according to the New York Post.

“There’s been an evolutionary process that this president has gone through … and I pointed out to all the members that were in the room that they all say things during the course of campaigns that may or may not be fully informed,” Mr Kelly told Fox News on Wednesday.

The border wall stands at the centre of a congressional struggle to overhaul immigration before the March expiration of a program protecting so-called “Dreamers” – immigrants who were brought to the country illegally as children.

President Trump wants any deal to include funding for the wall, which Democrats oppose and is expected to cost more than $US20 billion ($A28 billion) – which he described as “peanuts compared to what Mexico makes from the US NAFTA is a bad joke!”

Mr Kelly told Fox News in an interview on Wednesday that the administration was considering visa fees and a renegotiation of NAFTA as ways to get revenue from Mexico.

Trump slaps down chief of staff on border wall ‘evolution’