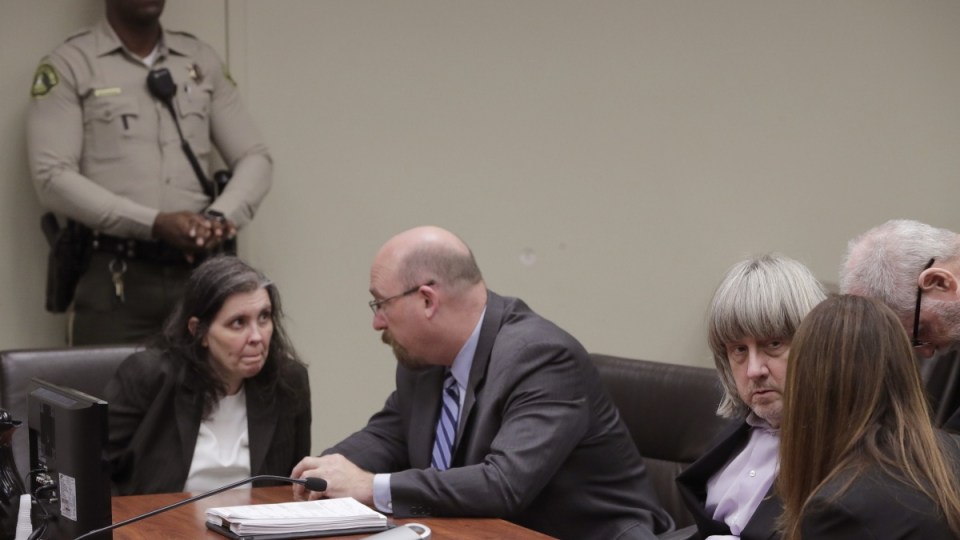 The California judge set bail at $15 million each for David and Louise Turpin. Photo: AAP

The California parents accused of torturing their 13 children at their house by chaining them to their beds for “months at a time” as punishment have pleaded not guilty to child abuse, torture and false imprisonment.

David Allen Turpin, 57, and Louise Anna Turpin, 49, were charged with more than two dozen counts of torture, child abuse and false imprisonment and face 94 years to life in prison if convicted.

David Turpin was also accused of sexually abusing one of his young daughters.

They appeared in plain clothes at the Riverside County Superior Court and entered pleas of not guilty to all charges.

The judge set bail at $15 million each and the Turpins are due to reappear in court at the end of February.

“A case like that sticks with you and haunts you,” Mr Hestrin said.

“Sometimes in this business you are faced with human depravity, and that’s what we have here.”

Mr Hestrin said three children were chained to beds when police arrived at the Turpins’ home on Sunday, including an 11-year-old and 14-year-old.

He said the parents had begun tying up their children with ropes many years ago, including hog-tying one child, but progressed to chains and padlocks when one escaped.

“These were a form of punishment meted out on these children and these adults,” Mr Hestrin said.

“These punishments would last for weeks or even months at a time.”

“Circumstantial evidence suggests the victims were often not released from their chains to go to the bathroom.”

Mr Hestrin said none of the victims were allowed to shower more than once a year, with attempting to wash included in the reasons for punishment.

“If the children were found to have washed their hands above the wrist area, they would be accused of playing in the water and they would be chained up,” he said.

Mr Hestrin said while the children’s punishment included being chained, beaten and strangled, it also extended to emotional abuse.

The prosecutor said the parents lived separately from their children while living in Fort Worth, Texas, and would just visit occasionally to drop off food.

He said the abuse intensified after the family moved to California and if the children were not chained up, they were locked in different rooms and fed on a schedule.

“The parents would apparently buy food for themselves and not allow the children to eat it,” Mr Hestrin said.

“They would buy pies, apple pies and pumpkin pies, and leave it on the counter and let children look at it, but not let them eat the food.”

The children were also denied the chance to play with toys, despite police finding many in the house, still in the original packaging.

The only activity they were allowed to do at home was write in journals, and Mr Hestrin said police had seized hundreds of them as evidence.

Mr Hestrin revealed the 17-year-old girl who escaped the house to alert police had plotted her escape for two years.

Another sibling escaped with the girl over the weekend but turned back out of fear.

Mr Hestrin said all 13 victims were severely malnourished and as a result some have cognitive impairment and a lack of basic knowledge of life.

He said a 29-year-old female victim weighed just 37 kilograms, while a 12-year-old victim was only the size of an average seven-year-old.

Why didn’t anyone notice?

Mr Hestrin said he believed the family’s nocturnal habits, staying awake all night and sleeping all day, contributed to the Turpin’s ability to escape notice.

The children had also been denied access to a doctor for the previous four years and had never seen a dentist.

All of the children were home schooled, with David Turpin listed in governmental records as principal, and did not know basic things like what medication or a police officer was.

One of the adult children attended classes outside the home, but Mr Hestrin said Louise Turpin would wait outside the classroom and take him home once it was finished.