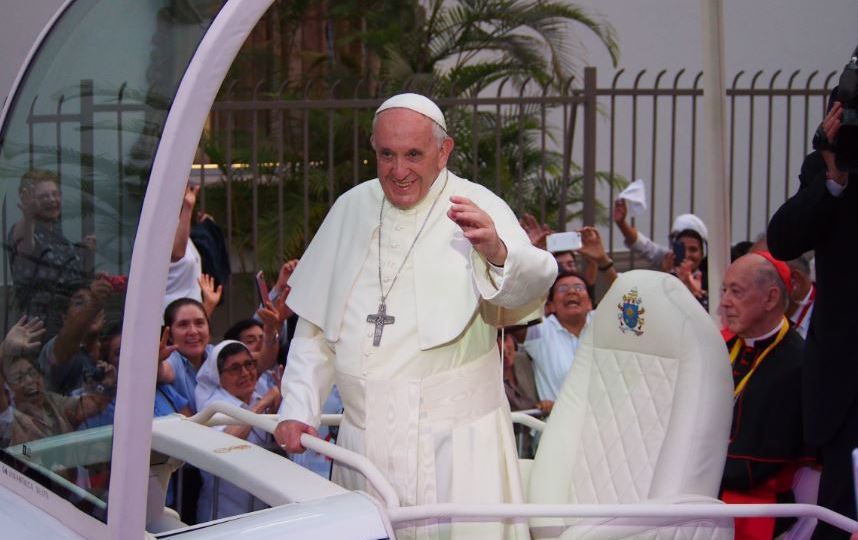 Pope Francis finds some friends in Peru, where protests like those in Chile were banned. AAP/Carlos Garcia Granthon

As he does during every papal visit, Pope Francis produced plenty of surprises in Chile: He married a couple during a flight, stopped his motorcade to help a fallen police officer and wept with victims of sex abuse by priests.

But the pope also faced protests and a level of hostility unheard of in modern times for a papal visit. Anti-pope protests had to be broken up with tear gas, attackers burned at least 11 Roman Catholic Churches and pamphlets were found threatening Francis that the “next bomb would be in your cassock.”

It remains to be seen whether the friction in Chile was a fluke or a harbinger of what to expect in future papal trips.

The neighbouring country of Peru, where Francis went on Thursday, isn’t taking any chances. Authorities have banned demonstrations because they “impact the image of the country,” police spokeswoman Veronica Marquez said.

Papal visits sometimes attract demonstrations. In 2010, thousands in London protested the visit of Pope Benedict XVI, condemning his stance on condoms, women’s rights and homosexuality, among other things.

But the ferocity and firebombing of churches in Chile went beyond anything in modern memory.

One of the pope’s sharply contested decisions – to appoint a Chilean bishop with close ties to the country’s most notorious pedophile priest – soured many on the visit before it even began.

While Francis celebrated Mass on Tuesday at a large park in Santiago, riot police shot tear gas and arrested dozens of protesters as they tried to march on the service.

Protesters included members of the country’s LGBT community, socialists and people angry at the church’s reaction to the sex abuse scandal that many Chileans don’t feel has been resolved.

Hours before Francis left Chile, he made comments that all but overshadowed his entire visit, and certainly would have added to the protests if they had come sooner.

When asked why he defended Bishop Juan Barros, the former protege of the pedophile priest, Francis said there was no proof Barros knew about the abuse and called those accusations against him slanderous.