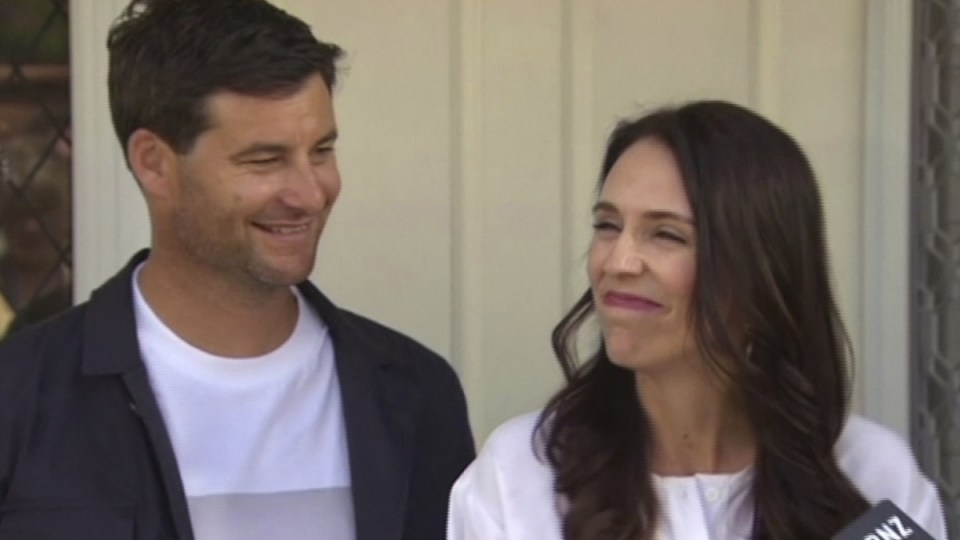 Ms Ardern says she will return to prime ministerial duties after a six-week break. Photo: AAP

New Zealand Prime Minister Jacinda Ardern has announced she is pregnant with her first child and will give birth in June.

In breaking the news on Friday, Ms Ardern said she will be “PM and a Mum” while her partner Clarke Gayford will be “first man of fishing and stay-at-home dad”.

Speaking to reporters in Auckland on Friday, Ms Ardern said she found out she was pregnant on October 13 last year while Mr Gayford was away filming for his fishing show.

She decided to break the news to him via Facebook video chat given it was of a “pretty big magnitude”.

Mr Gaylord, who was in the bathroom at the time, said they had only just got off the phone and was wondering why she was calling back.

Ms Ardern, 37, called the pregnancy a “happy surprise”, saying, “I won’t go into detail but fluff — enough to say we had been told that we would need help.”

As to the timing of her baby announcement, “There is only so long you can say you were eating too many Christmas pies,” said Ms Ardern.

‘I am not the first woman to multi-task’

Ms Ardern plans to take a six-week maternity leave. When she returns to paid work, Mr Gayford will take up full-time duties as a stay-at-home parent.

“Where possible Clarke will travel with me. I am not the first woman to work and have a baby.

“I know these are special circumstances, but there will be many women who will have done this well before I have,” she said.

Still, “I have to acknowledge, though, that my job is different. My job is demanding, people place faith in me and have given me a mandate.

“I have to make sure that I’m juggling both that new role, but also fulfilling my duties to New Zealand.”

Ms Ardern admitted to suffering a “bit of morning sickness” early on which made “things tricky” in keeping the pregnancy a secret. Still secret? The sex of the baby and the baby-name shortlist.

Earlier, in an official statement, Ms Ardern spoke of the joy she and Mr Gayford are feeling.

“We’re both really happy. We wanted a family but weren’t sure it would happen for us, which has made this news unexpected but exciting,” she said.

We thought 2017 was a big year! This year we’ll join the many parents who wear two hats. I’ll be PM & a mum while Clarke will be “first man of fishing” & stay at home dad. There will be lots of questions (I can assure you we have a plan all ready to go!) but for now bring on 2018 pic.twitter.com/nowAYOhAbF

“As is the case when I am overseas, Mr Peters will act as prime minister, working with my office while staying in touch with me. I fully intend to be contactable and available throughout the six week period,” Ms Ardern said.

The couple found out in the midst of negotiations over who would form the new government but had kept it quiet as was common in the early stages of pregnancy, she said.

“Knowing that so many parents juggle the care of their new babies, we consider ourselves to be very lucky.”

Prime Minister Malcolm Turnbull sent a congratulatory tweet to Ms Ardern after speaking to her earlier on Friday morning.

Congratulations @jacindaardern on your wonderful news today. When we spoke this morning you sounded more excited than you did when you won the election! Lots of love and best wishes from me and Lucy and all of us across the ditch.

Ms Ardern is not the first world leader to be pregnant. Pakistan’s Benazir Bhutto caused a stir with her second pregnancy in 1990.

After being elected Labor leader in August last year, less than 24 hours into the job she was quizzed about motherhood and making choices between balancing her career and raising a family.

At the time, Ms Ardern said she had been “really open about that dilemma because I think probably lots of women face it”.

“For me, my position is no different to the woman who works three jobs, or who might be in a position where they are juggling lots of responsibilities,” she said.

Volodymyr Zelensky: How war will end as Ukraine ‘breaks backbone’ of Russian army
COVID claims 45 more lives as nationwide daily cases soar to 18,000
French foreign minister hails defeat of Morrison and his ‘notorious incompetence’
Peter Dutton touted as next Liberal leader as he claimed victory in Dickson
‘The urgency of the situation’: WHO steps in as monkeypox cases erupt around the world
Jim Chalmers decries Coalition waste as Labor hits the hustings amid downpours in Queensland
US couple accused of torturing their 13 children plead not guilty in California court
Today's Stories