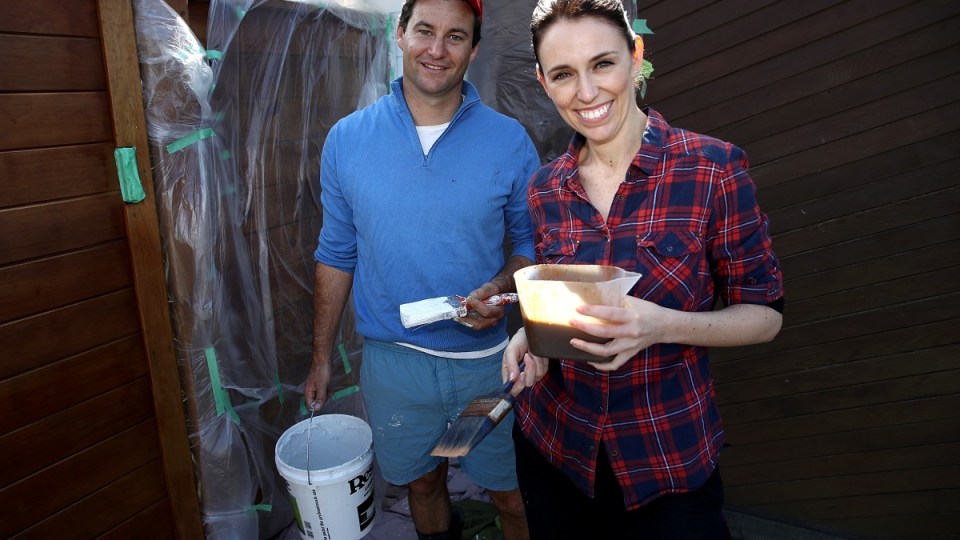 Jacinda Ardern and her partner Clarke Gayford split the chores when they're at home. Photo: Getty

Hours after telling the world she is pregnant with her first baby, New Zealand prime minister Jacinda Ardern welcomed a news crew to her Auckland home for a sitdown interview.

With longtime partner, TV presenter Clarke Gayford by her side, Ms Ardern was asked whether she’d prefer a boy or a girl (she knows the sex, but is keeping it a secret).

“I’m hoping for a healthy baby,” she said.

“I hope it’s a child that learns kindness and that wants to do something to make a difference in the world.”

“Not too free, we don’t want too many challenges,” she said. “Just free enough.”

While some social media users have already dubbed the impending arrival New Zealand’s ‘royal baby’, life at Ms Ardern and Mr Gayford’s 1990s brick and tile home in Point Chevalier is more fun than fancy, the PM has said.

In a relationship for around five years, the pair has their domestic routine sorted. He washes and dries. She installed the toilet. He painted the fence. They both painted the interior walls.

When Ms Ardern, 37, gets home every night, the first thing she does is “kick my shoes off and scavenge in the kitchen,” she told Stuff.co.nz last February.

She spends most of her time at the secondhand kitchen table, and is addicted to her salad spinner and yoghurt maker. When they entertain, it’s “anything that uses the BBQ,” said Ms Ardern, who also makes a mean fish pie.

Mr Gayford is the main household cook; he whips up porridge with sliced banana and maple syrup for breakfast, and on the night of the New Zealand election last year – a tea towel flung over one shoulder – he made fish bites for Ms Ardern from a 42kg sea bass he caught.

She admitted she’s not great at keeping houseplants alive, but finds other housework relaxing. “I am embarrassed to say that I enjoy vacuuming, as long as it’s only once a week,” she told Stuff.

They’ve said their perfect date is a night at their home, which is furnished with mid-century Scandinavian pieces, Kmart cushions and recycled finds.

Ms Ardern was by herself at their modest sanctuary on Friday, October 13, when she found out she was pregnant; Mr Gayford was in Queensland shooting for his TV fishing show.

She used the video function on Facebook to tell him he was going to be a father.

“I think you were in the bathroom,” she reminded him during their media announcement of the baby.

“Not the toilet! I should make that clear!”

For Mr Gayford, the news was “quite the reveal. And shock”.

The couple met when Mr Gayford wrote to his local MP about a privacy issue in 2013. He got no response, so instead took his grievance to Ardern.

The two arranged a coffee date, where they discovered a shared interest in music. Mr Gayford took Ms Ardern on her first fishing trip, where she caught a 5.5kg snapper.

“I couldn’t have chosen a better day. The sea went glass flat and there were whales and dolphins on cue everywhere,” he told TV Guide.

When his partner was elected to the top job, “The grin on my face says it all, I’m still coming to terms with it, but am enormously proud,” said Mr Gayford.

What does he see his unofficial ‘First Man’ job as involving? “Just to make sure that she’s okay and be in the background going, ‘Have you eaten your lunch? Have you slept properly? You’ve got lipstick on your teeth’.”

Those duties will expand when Ms Ardern gives birth in June. After six weeks of maternity leave, she will return to full-time PM duties while Mr Gayford becomes a stay-at-home dad.

“It doesn’t matter how many books you read or advice you get, you don’t really know until you’re there,” he said. “I’m looking forward to it. I love challenges.”

As for ideas for baby names, Ms Ardern said it could create ructions at home: “I expect we will be like every other couple and argue about it for the last six months.”

Asked if the pair will shake up their situation even more by marrying, Mr Gayford laughed. “Wow! No!” he said.

“I like the idea that we are doing everything in reverse. We bought a house together, then we are having a baby, and we will see.”

Jacinda Ardern: Inside the mother-to-be’s home life and loved-up relationship