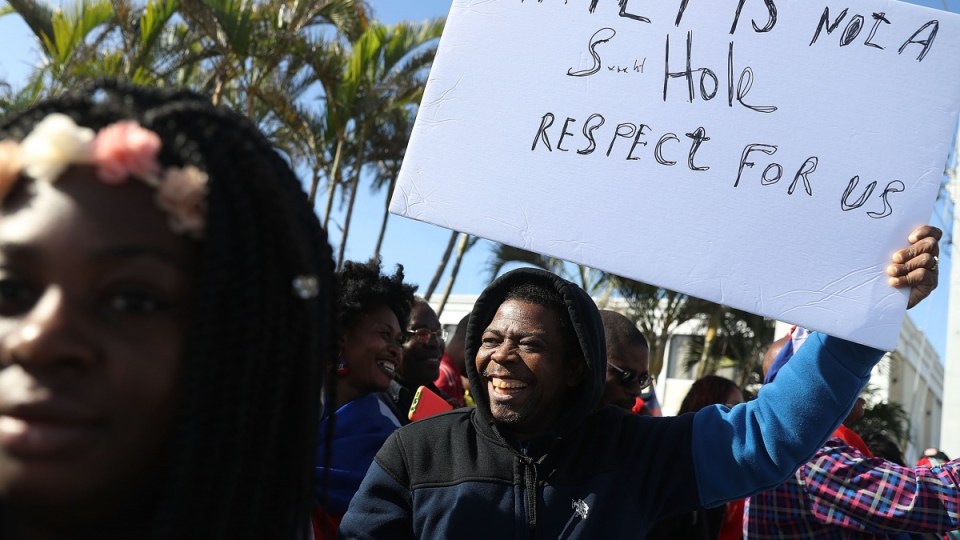 Haitians protest outside Donald Trump's Florida retreat over his comments about their country. Photo: Getty

Haitians angered by comments US President Donald Trump is said to have made about their country have become involved in a shouting match with pro-Trump protesters down the street from the president’s Mar-a-Lago retreat.

Video posted by WPEC-TV showed several hundred pro-Haiti demonstrators yelling from one side of the street on Monday while waving Haitian flags.

The Haitians and their supporters shouted, “Our country is not a s—hole,” referring to comments the president reportedly made last week during a meeting with senators about immigration. Mr Trump has said that is not the language he used.

The smaller pro-Trump contingent waved American flags and campaign posters and yelled, “Trump is making America great again.” One man could be seen telling the Haitians to leave the country. Police kept the sides apart.

The corner is across the bridge that leads to Mar-a-Lago. Mr Trump has been at the resort for the Martin Luther King Jr holiday weekend and his motorcade usually passes that corner. Monday would have been King’s 89th birthday.

President Trump dedicated his weekly address to King, the civil rights leader who was assassinated 50 years ago in April.

Mr Trump spent Monday’s federal holiday in Florida with no public appearances on his official schedule, but he tweeted the radio and video address to his followers.

Mr Trump said in the address that King’s dream of a colour-blind society offered dignity and hope to every American, regardless of colour or creed.

He has been buffeted by claims he used a vulgarity to describe African countries and questioned the need to allow more Haitians into the US.

President Trump declared on Sunday night that “I’m not a racist.”