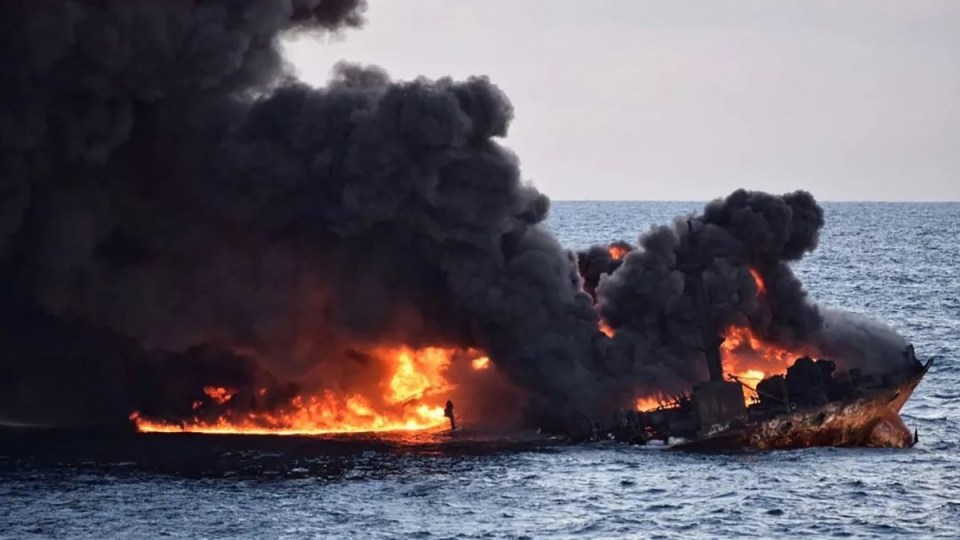 Experts fear many casualties and an ecological disaster after a burning Iranian oil tanker sank in the East China Sea early on Monday.

The stricken tanker, called the Sanchi, which had been adrift and on fire for more than a week following its collision with another vessel, “suddenly ignited” around noon local time on Sunday, China Central Television said. It sank approximately 260km off the coast of the Chinese city of Shanghai.

The tanker was carrying 136,000 tons of condensate, a light oil, to South Korea from Iran. It was unclear how much had spilled or burned off after the collision.

“There is no hope of finding survivors,” Mahmoud Rastad, the chief of Iran’s maritime agency, told The Associated Press. Thirty-two crew members are believed to have died.

President Hassan Rouhani of Iran expressed his condolences and called on government agencies to investigate the tragedy and to take any necessary legal measures, according to state TV.

On Saturday, a Chinese salvage team recovered two bodies from the stricken tanker, which had been at risk of exploding after it caught fire and was left adrift, state news agency Xinhua reported. The four members of the team found the two bodies on deck.

The Panamanian-flagged vessel collided with the CF Crystal, a Hong Kong-registered bulk freighter, around 8pm on January 6, about 160 nautical miles east of Shanghai.

All 21 Chinese crew members of the CF Crystal, which was transporting grain to Guangdong Province in southeastern China from the United States, were rescued, the Ministry of Transportation in Beijing said. The rest of the crew, including 30 Iranians and two Bangladeshis, remained missing.

“The ship sinking is the worst situation,” Ma Jun, director of the Institute of Public and Environmental Affairs, told The Global Times.

“The condensate oil, a kind of ultra light oil on Sanchi, is different than other types of crude oil and is poisonous to marine life.”

It would have been better for the oil to have burned than to sink with the ship, Lin Boqiang, director of the China Center for Energy Economics Research at Xiamen University, told The Global Times.

“The condensate oil will probably leak from the broken ship as it sinks and any marine life that encounters it could be killed,” Dr Lin said.

“Therefore, it is important to assess how much oil leaked into the sea to determine how serious the marine ecology might be impacted.”

Members of the salvage team tried to get to the living quarters on the tanker, but they were driven back by temperatures on the burning ship of around 89 degrees Celsius, Xinhua reported. Before sinking, the ship was at risk of exploding because of the presence of spilled oil as the fire raged, the Ministry of Transportation said.

The United States Navy also sent a P-8A Poseidon airplane from Kadena Air Base on Okinawa, Japan. It searched about 3600 square nautical miles without locating any missing sailors, the Navy said.

The salvage team recovered the voyage data recorder, or “black box” from the bridge, before leaving the vessel less than half an hour after boarding because the wind had shifted and “thick toxic smoke” had complicated the operation, Xinhua reported.

The Sanchi is owned by Bright Shipping Limited, a subsidiary of the National Iranian Tanker Company registered in Hong Kong, according to the Chinese authorities and an International Maritime Organization database.