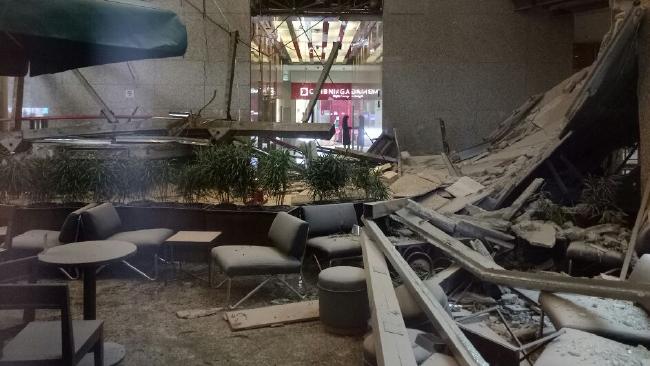 Dozens of people have been seen running from the Indonesian Stock Exchange after a floor reportedly collapsed. Photo: Twitter

One of the university students injured in a dramatic accident in the heart of Jakarta’s financial district remembers screaming for help as she lay injured on the floor of the Indonesia Stock Exchange building.

Firda Putri, 20, was part of a university study tour to the stock exchange on Monday.

CCTV footage shows the entire group falling several metres to the ground when the suspended walkway collapsed with 72 people were hurt in the incident.

“We were on the corridor on the second floor, but when my lecturer asked us to go back, suddenly it collapsed,” she told the ABC from her bed at Jakarta’s Mintohardjo Naval Hospital.

“I fell down to the lobby. I couldn’t remember much. My legs were weak, my hands were weak.

“I don’t remember when I fell, what I remember was that my leg was hit by concrete.

“I went out by myself, then my friend carried me.

“I screamed for help, some staff tried to help.”

Harry Setiawan was the shift supervisor at the Salad Stop restaurant in the building’s lobby.

“There was a loud thundery noise, and dust everywhere getting into our store,” he said.

“I was panicking — I tried to secure our stuff including the safebox, turn off the stove, electricity. I told everyone to get out, to evacuate.”

The stock exchange building was attacked with a car bomb in 2000, but police quickly ruled out terrorism in relation to Monday’s collapse.

Floor collapse ‘not because of a bomb’

The floor collapse was not caused by a bomb, national police spokesman Setyo Wasisto said.

The building is one of a two-tower complex which was targeted in a car bombing by Islamist militants in September 2000.

Dozens of police officials cordoned off the multi-storey complex as many people ran away and others were seen sitting on steps outside the lobby.

Police say they will obtain the building’s blueprints and speak to the firm that built the walkway.

“The second floor of the building has collapsed,” said Vindy, a personal assistant to exchange president Tito Sulistio, who was in the building at the time.

Megha Kapoor, who works in the building and was in the lobby at the time, said: “Slabs of concrete started to fall, there was lots of dust. Water pipes had burst.”

“I heard a loud cracking sound. I saw a lady unconscious stuck under slab of concrete.”

She said there had been a group of high school students on the level when it started collapsing.

Inside Jakarta floor collapse: ‘My legs were weak’