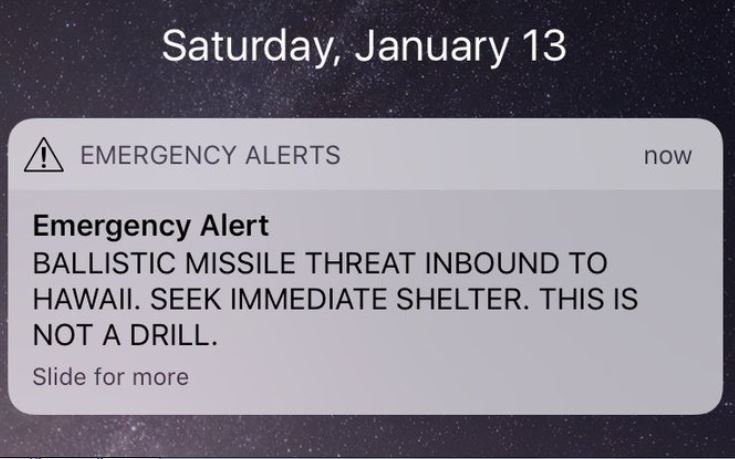 An bogus alert that a ballistic missile was heading straight for Hawaii, plunging residents into a full-blown panic on Saturday, was issued by mistake when an employee “pushed the wrong button”, the state’s governor said.

The emergency alarm, sent to cellphones just before 8:10 am, said in all caps,

“Ballistic missile threat inbound to Hawaii. Seek immediate shelter.This is not a drill.”

Then came ‘take shelter” warnings from all Hawaii’s TV stations, like the one below which interrupted a British soccer match.

It took almost 40 minutes before the warning was rescinded — a period of sheer panic that saw people hug their loved ones goodbye.

Others fell to their knees and prayed in the streets.

Governor David Ige apologised for the mistake and said the alert was sent during what should have been a routine shift change at the Hawaii Emergency Management Agency’s command and control nerve centre.

“It was a procedure that occurs at the change of shift where they go through to make sure that the system, that it’s working. And an employee pushed the wrong button,” he said, adding that such shift changes occur three times a day.

“I was awakened by the alert like everyone else here in the state of Hawaii. It was unfortunate and regrettable.

“We will be looking at how we can improve the procedures so it doesn’t happen again.”

Standard operating procedure requires workers clocking on to test the alert system to make sure it is full operational, but this time the message, which should not have been heard or seen beyond the agency’s HQ control room, went public.

The alert gained an instant credibility with locals who have nervously followed boasts and threats by Kim Jong-un’s North Korean regime that the islands are now within range of his latest missiles.

A civil defence spokesman said the agency is trying to determine who pushed the wrong button and why.

The initial message sparked a chain reaction that further escalated the panic – despite the Pentagon and US Pacific Command issuing a statement that they had “detected no ballistic missile threat to Hawaii.”

New Daily contributor Silas Aiton is in Hawaii and received the bogus message along with millions of others.

“I am in a hotel room in Waikiki and the alert came through on my phone,” he reports.

“I rang the hotel reception and they said to stay in our room until further notice.

“It took 38 minutes for them to tell us it was a false alarm.

“The people of Hawaii were in shock and now not happy, especially with the end of the message saying ‘this is not a drill’, which is what was announced during during the Japanese attack on Pearl Harbor in 1941.

Michael Kucharek, spokesman for the North American Aerospace Defense Command (NORAD) in Colorado Springs, Colorado, said NORAD and the US Northern Command are still trying to verify what happened in Hawaii.

“NORAD did not see anything that indicated any sort of threat to Hawaii,” he said.

President Donald Trump, who was in Florida when the panic erupted, was briefed on the false alert.

White House spokeswoman Lindsay Walters said it “was purely a state exercise”, with no responsibility accruing to federal agencies. 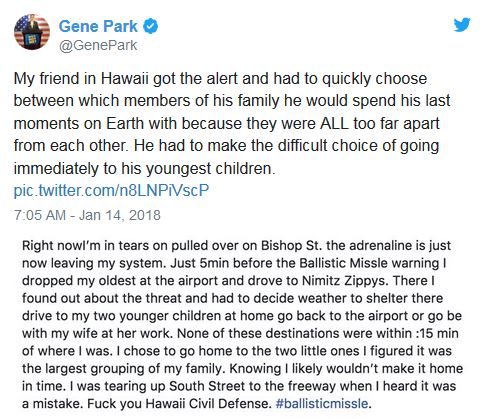 At the PGA Tour’s Sony Open on Oahu, Waialae Country Club was largely empty and players were still a few hours from arriving when the alert showed up. The tournament staff urged the media centre to evacuate.

Staff members at the club streamed into the clubhouse and tried to seek cover in the locker room, which was filled with the players’ golf bags, but instead went into the kitchen.

In Honolulu, Jaime Malapit, owner of a hair salon, texted his clients that he was cancelling their appointments and closing his shop for the day. He said he was still in bed when the phone started going off “like crazy.”

Mr Malapit thought it was a tsunami warning at first.

“I woke up and saw a missile warning and thought ‘no way.’ I thought ‘No, this is not happening today,”‘ Malapit said.

He was still “a little freaked out” and paranoid even after hearing it was a false alarm.

Others were outraged that such an alert could go out in error, with funnyman Jim Carrey tweeting that, while this was a false alarm, President Trump’s bellicose rhetoric and sabre-rattling against North Korea were likely to make the next alert genuine. 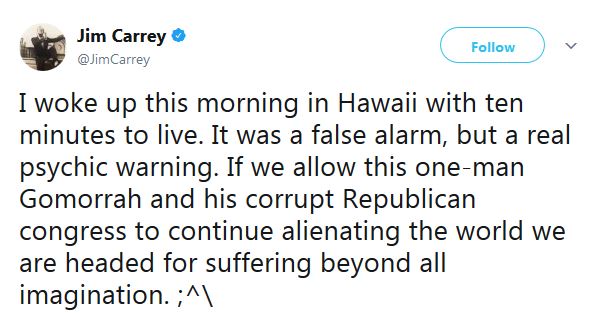 “There needs to be tough and quick accountability and a fixed process,” he wrote.

Labor victory fires up Tamil family’s hopes of return to their Biloela home
Perth residents urged to play it safe as massive storm rolls across region
Joe Biden says he’s not fussed by North Korea’s rumoured return to nuclear tests
ACTU hails Labor’s triumph as the first step to pay raises
Analyst: Sharemarket will be anxious about a Labor pact with Greens
French foreign minister hails defeat of Morrison and his ‘notorious incompetence’
Donald Trump besieged by controversy and scandal on all sides
Today's Stories