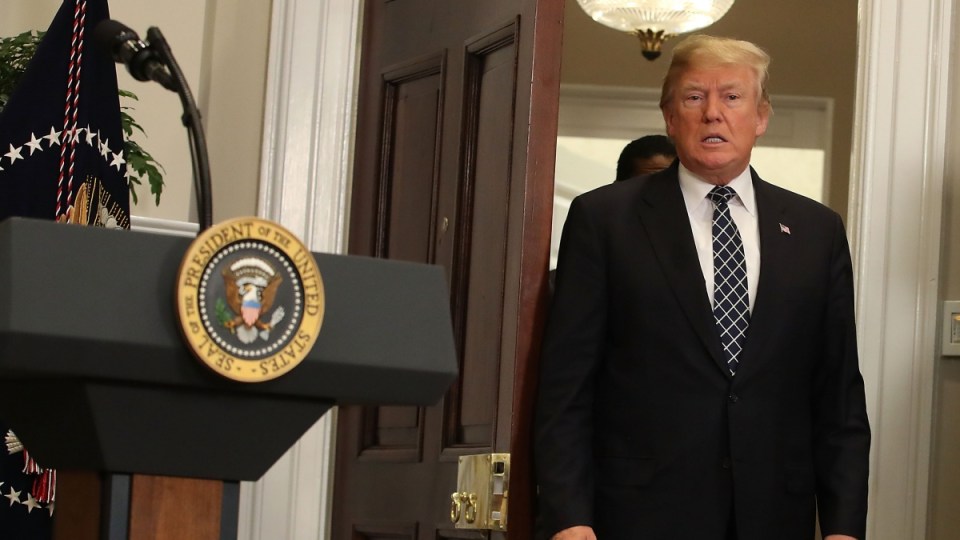 Yet again Donald Trump has shocked and appalled world leaders with his vitriol. Photo: Getty

United States President Donald Trump has had a turbulent week, but an expert says the worst is probably yet to come with controversial comments and burgeoning scandals only deflecting attention from an administration in turmoil.

This week it was revealed the US President’s lawyer paid an adult film star to keep their alleged affair quiet, the Washington Post reported Mr Trump had called African nations and Haiti and El Salvador “s***hole countries”, his trip to London was cancelled and the US Ambassador to Panama resigned because he could not serve Mr Trump.

Australian National University strategic and defence studies centre Associate Professor Peter Dean told The New Daily Mr Trump’s controversial comments about immigration were not “off the cuff” – they appealed to his Republican support base and were aimed to deflect attention away from other “slow-burn” issues.

He said this included Special Counsel Robert Muller wanting to talk to the US President about Russian influence in the 2016 US election and stories in US newspapers suggesting an impending Trump administration exodus.

“I think sometimes the words are off the cuff, but the intent to say something controversial about immigration is more planned,” Prof Dean said.

“The issue with Trump is that the rule book doesn’t count, and this is part of the ongoing Trump saga. We’re never quite sure what will blow up and what won’t blow up.”

The Wall Street Journal has reported Mr Trump’s lawyer arranged a $US130,000 ($164,000) payment to a former adult film star before the 2016 election in exchange for silence about an alleged sexual encounter.

Michael Cohen, a lawyer for the Trump Organisation, set up the payment to Stephanie Clifford, who is known in the adult film industry as Stormy Daniels.

The alleged encounter took place in July 2006 when the pair met at a celebrity golf tournament in Lake Tahoe. Mr Trump married Melania one year earlier in 2005.

“These are old recycled reports, which were published and strongly denied prior to the election,” a White House official told the newspaper.

Mr Cohen wouldn’t comment on the payment and said in a statement, “President Trump once again vehemently denies any such occurrence, as has Ms Daniels.”

The long-time attorney also accused the Journal of perpetrating “a false narrative for over a year”.

Mr Trump is facing global backlash for referring to Haiti, El Salvador and African nations as “s**hole countries” during a White House meeting on immigration on Thursday.

The White House has not denied the language, while Mr Trump has attempted to address the vitriol levelled at him in a series of Twitter posts.

Mr Trump said he never said anything derogatory about Haitians other than acknowledging Haiti is a poor and troubled country in one of the posts.

“Probably should record future meetings – unfortunately, no trust!” he said.

The Post quoted two people briefed on the meeting, who said Mr Trump said: “Why are we having all these people from s***hole countries come her.”

Trump cancels first trip to London as US president

Donald Trump has cancelled his first presidential trip to London, where he had been expected to open the new US Embassy, claiming he didn’t like the Obama Administration’s “bad deal”.

“The reason I cancelled my trip to London is that I am not a big fan of the Obama Administration having sold perhaps the best located and finest embassy in London for peanuts,” Mr Trump said on Twitter.

The ABC reported London Mayor Sadiq Khan said the US President appeared to have “got the message” that while many Londoners love and admire America and Americans, they find Mr Trump’s policies and actions to be the polar opposite of his city’s values of inclusion and diversity.

“His visit … would without doubt have been met by mass peaceful protests,” Mr Khan said.

US ambassador to Panama steps down

On Friday (US time) the US State Department confirmed US ambassador to Panama John Feely has decided to retire for “personal” reasons and would finish on March 9.

“As a junior foreign service officer, I signed an oath to serve faithfully the President and his administration in an apolitical fashion, even when I might not agree with certain policies,” Mr Feely wrote in his resignation letter.

“My instructors made clear that if I believed I could not do that, I would be honour-bound to resign. That time has come.”

Under-secretary of State Steve Goldstein said Mr Feely’s departure was not in response to the US President’s reported comments about foreign countries.

The State Department learned of the Panama US Ambassador’s plan on December 27, according to Reuters.

Donald Trump besieged by controversy and scandal on all sides