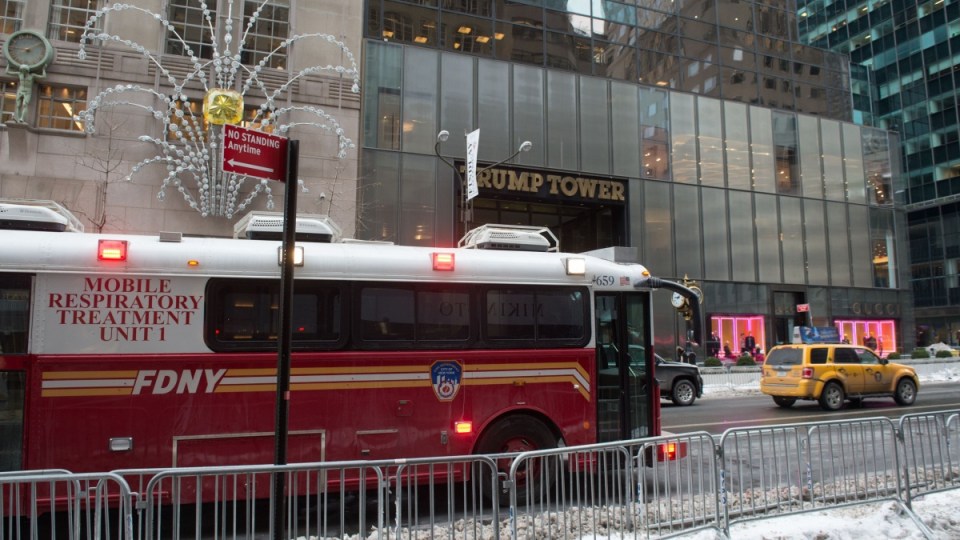 There are reports of injuries after a fire broke out at Trump Tower in Manhattan. Photo: Getty

Two civilians and one firefighter have been injured in an early-morning fire near the top of Trump Tower in New York City on Tuesday (AEDT).

The fire broke out in the top floor’s heating and air conditioning system just before 7am local time, according to the Fire Department of New York.

Local media initially reported there were no injuries but one person sustained a serious, possibly life-threatening injury, and another had a minor injury, FDNY said.

US President Donald Trump was in Washington at the time.

A New York fire department statement said the injuries sustained at the blazer were not life threatening.

Aerial views showed firefighters on the roof of the skyscraper, with smoke billowing from one corner of the high-rise at East 57th Street and Fifth Avenue in midtown Manhattan.

More than 90 minutes after the initial report, 84 firefighters and 26 units were still on the scene.

WATCH: Firefighters responded to a fire on the roof of Trump Tower in New York City https://t.co/LnII0XquRZ pic.twitter.com/yyJLEPC50K

“The fire wasn’t in the building,” FDNY’s Manhattan borough commander Roger Sakowich said in a statement.

“It was on top of the building. We had flames coming out of the vents, no smoke condition or fire was on the inside.

“We were able to extinguish the fire without any problems within the building. Everything went according to plan.”

Eric Trump, one of the President’s sons, earlier described the blaze as a small electrical fire in the cooling tower on the building’s roof. He thanked the firefighters for doing “an incredible job”.

There was a small electrical fire in a cooling tower on the roof of Trump Tower. The New York Fire Department was here within minutes and did an incredible job. The men and women of the #FDNY are true heroes and deserve our most sincere thanks and praise! https://t.co/xuTmq1GBbj

“The New York Fire Department was here within minutes and did an incredible job,” said the younger Trump,” he said.

“The men and women of the #FDNY are true heros and deserve our most sincere thanks and praise!”