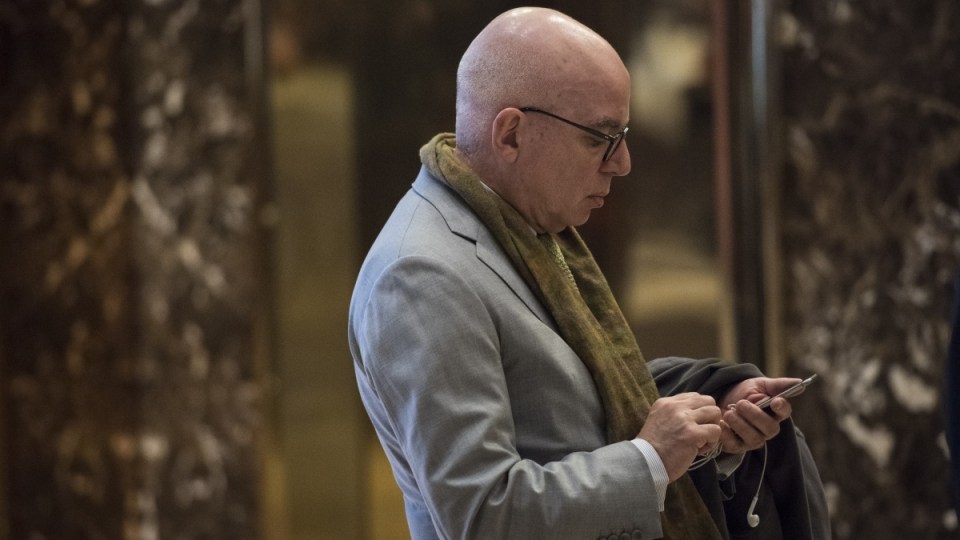 Whatever his claims to everyman status, Donald Trump is a creature of New York City power and celebrity, having emerged from a treacherous swamp where flattery and fame are the only nutrients.

So it’s only appropriate that the first real damage to Mr Trump’s presidency should be delivered by a journalist who knows how to swim through those same fetid waters.

Michael Wolff, author of the devastating Fire and Fury: Inside the Trump White House, is not interested in policy or process.

He’s never been part of the White House press herd, with its pecking order and customs. Washington is full of journalists who mark their careers – like rings on a tree – with the number of administrations they’ve covered.  Based in Manhattan, 320 kilometres to the north, Mr Wolff couldn’t care less about Washington’s folkways.

With a career as a columnist at high-profile outfits like Vanity Fair, New York magazine and The Hollywood Reporter, Mr Wolff is a Manhattan-centric reporter, obsessed with the workings of media and power.

Rather than the White House press room, he prefers to haunt lunchtime at Michael’s, the Manhattan midtown restaurant that serves as the media elite’s cafeteria.

His is a journalism of tone and attitude, given to nasty, apocalyptic pronouncements that are often light on attribution. He’s never been known as a particularly reliable reporter, and his journalism record has been marred for years by accusations of sloppy reporting, “piped” quotes and fictitious scenes.

With his Dr Evil countenance and oily manner, he is distrusted, if not loathed, by a great many reporters, who resent his seemingly flippant attitude toward the facts and his two-faced sycophancy towards power.

Journalists like to think they speak truth to power. Mr Wolff prefers to whisper sweet nothings before putting the boot in.

Prior to Fire and Fury, his most prominent journalistic coup was managing to persuade Rupert Murdoch to participate in Mr Wolff’s 2008 biography, The Man Who Owns the News.

In his review of the book, New York Times media critic (and Wolff antagonist) David Carr, since deceased, wrote that the pair were well-suited to each other.

“Both adore gossip and revel in their unpleasantness, and neither gives a rip what anyone else thinks of them,” Mr Carr wrote of Mr Murdoch and Mr Wolff.

You can almost hear that swamp water passing over their gills.

The Man Who Owns the News was highly critical of Mr Murdoch, leading many to wonder why such a wily titan let himself be sucker punched by Mr Wolff.

In his review, Mr Carr—a much-admired figure whom Mr Wolff dismissed and mocked—quoted Mr Wolff by way of explanation.

“Possibly his willingness,” Mr Wolff wrote of Mr Murdoch, “had something to do with his perception that I regarded many of his enemies – particularly the journalistic priesthood – with some of the same contempt with which he regarded them.”

And if it worked once, why not try it again?

In the weeks after Mr Trump’s election, Mr Wolff began to hammer big media’s “apoplectic” response to his ascension, telling them to quit whining and put on their big-boy pants.

In his reptilian mind, Mr Trump reasoned that if Mr Wolff wanted to write about him, he must be just as worthy – and powerful – as Rupert. And so the coveted blue White House pass appeared.

In the swamp, no one is safe.

Back in the early 1990s, when I was a young reporter at the New York Daily News, I once called Mr Trump’s office for a comment on some goofy story about his love life. Ten seconds later, he called back. I can’t remember what he said, but I couldn’t believe such a busy guy had time for such a silly call. I later learned that every reporter in the newsroom had a similar story.

Mr Wolff knows Mr Trump’s true nature – his ceaseless need to see his name in bold-faced type, to sustain his ubiquity, to move through that swamp.

Whatever the specific shortcomings of his reporting, Mr Wolff’s portrait of a White House out of control, with a childlike fool at the helm, has the feel of truth that even disapproving DC journalists acknowledge.

It jibes with what they know, but have been unable to write. And it’s changed the narrative on this presidency going forward. Thanks to a New Yorker, Washington will never be the same.

Larry Hackett is the former editor in chief of People magazine in the US and a current contributor to the morning television news program Good Morning America. Based in New York, he writes regularly for The New Daily on American life and politics.

Michael Wolff: The man who rocked the White House – and its press corps